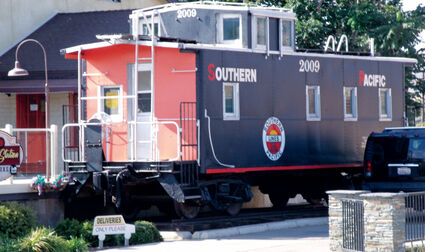 The caboose by the Tehachapi Depot Railroad Museum is owned by Gold Coast Station.

Cabooses were manned rail cars coupled at the end of freight trains. Cabooses were once used on nearly every freight train except local ones, and smaller railroads generally used them as tourist attractions. The caboose by the Tehachapi Depot Railroad Museum is owned by Gold Coast Station.

The caboose provided the train crew with a shelter at the rear of the train from which they could exit for switching. It served to protect the rear of the train when stopped. The crew also inspected the train for problems such as shifting loads, broken and dragging equipment. The conductor kept records and handled business from a table or desk in the caboose. For longer trips the caboose provided minimal living quarters, and was often decorated by the crew with pictures and posters.

Early cabooses were nothing more than flat cars with small cabins erected on them, or modified box cars. The standard form of the American caboose had a platform at either end with curved grab rails to facilitate train crew members access to a moving train. A caboose was fitted with red lights called markers to enable the rear of the train to be seen at night.

The form of cabooses varied over the years, with changes made both to reflect differences in service and improvements in design. The most common caboose structure on American railroads was the cupola. It had a small windowed projection on the roof. The crew sat in elevated seats in order to inspect the train. The position of the cupola varied. In most eastern railroad cabooses, the cupola was in the center of the car, but most western railroads preferred to put it toward the end.

Originally lit with oil lamps, later versions incorporated an electrical generator driven by belts coupled to one of the axles that charged a lead-acid storage battery when the train was in motion. Coal or wood was originally used to fire a cast iron stove for heat and cooking. Later a kerosene heater became more popular.

The classic idea of the "little red caboose" at the end of every train came about when cabooses were painted a reddish-brown. However, some railroads (UP for example), painted their cabooses yellow or red and white. The most notable was the Santa Fe which in the 1970s started a rebuild program for their cabooses in which the cars were painted bright red with an 8-foot-diameter Santa Fe cross herald emblazoned on each side in yellow.

While cabooses are no longer part of today's trains they, have become popular for collection by railroad museums and for city parks and other civic uses, such as visitor centers. Cabooses have been reused as garden offices in private residences, and as portions of restaurants. Caboose motels have appeared, with the old cars being used as cabins