The humble origins of toilet paper 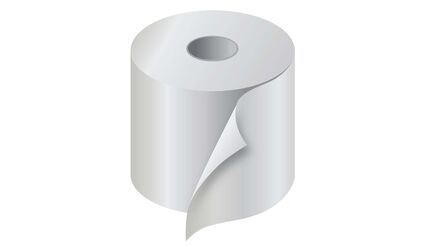 Toilet paper is such a necessity today, it's hard to imagine life without it. So how did people handle their business before toilet paper was available? Depending on where they lived and what the climate was like, people used a wide array of materials for the purpose such as coconut husks, moss, leaves, pottery shards and even handfuls of snow. Brrr!

In Ancient Greece, people used smooth stones or malleable clay. In the communal bathrooms of Ancient Rome, they often used their bare hands, which they rinsed in a bucket of water afterwards. Better equipped Roman bathrooms supplied sea sponges that were shared, usually after being soaked in a mixture of water, salt and vinegar. Wealthy Romans, eschewing the lower class custom of sharing such intimate objects, usually had their own sea sponge fastened to a stick for easier reach.

About 1,500 years ago, the Chinese were already using paper for their toilet needs. One emperor stipulated that the toilet paper custom-made for him should measure two feet wide by three feet long. Maybe it's just me, but that seems a little oversized.

England's King Henry VIII employed a Groom of the Stool, whose job was to ensure the king's comfort and attend to his every need, even in the bathroom. There is documentation that they used blankets, cotton or linen for the purpose.

So what did America's Founding Fathers use to clean up after going to the bathroom? The most prevalent material used for that purpose in Colonial America was - wait for it - a corn cob! Seriously.

In 1857, Joseph C. Gayetty sold medicated toilet paper as a remedy for hemorrhoids. But most people were too embarrassed to buy a product specifically for toilet cleanup. By that time, although indoor plumbing was used in some places, most people still did their business in outhouses. They typically wiped with newspaper or catalog pages. But once indoor plumbing became the norm, people recognized the need for bathroom tissue, as they preferred to call it. The old practice of using paper was incompatible with flushing toilets, clogging pipes and creating unnecessary work and expense.

In the future, as toilets and bidets become more efficient and the demand for environmentally sound products increases, toilet paper may be rendered obsolete. But, for now, it's clearly a staple of comfort and hygiene and a mark of modern civilization.