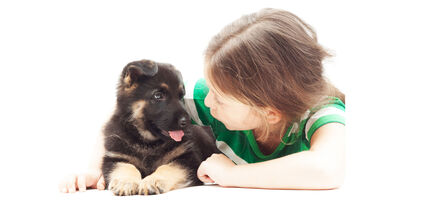 Kaylee wanted a puppy. I knew this was coming and that avoiding the issue was no longer an option. Her seventh birthday was looming and my ‘friend,’ Lillian, told me - in front of Kaylee - that her litter of seven puppies were soon to be ready for their forever homes. Thanks, Lillian.

Life was going to change with a puppy in the house, that was for certain. There would be mess to clean up, chewed table legs, ‘little accidents’ on the stairs, needle-sharp teeth, and late-night walks in the dead of winter. I had no doubt that these doggy duties would fall to me. I mean, you can’t send a seven-year-old out into the dark alone with a puppy, can you? Can you?

Robert was no help. Kaylee had him wrapped around all of her cute fingers all of the time.

“Pleeeeaaase, Daddy? Can’t I have one of Auntie Lillian’s puppies? I’ll be the best dog owner you’ve ever seen...Pleeeeaaase?” The dramatics were award-winning.

“Dogs are for life, Kaylee. That means for the next twelve to fifteen years you will be walking your dog every day, feeding it, and paying the vet’s bills,” I said, unhelpfully, while washing the dishes. I didn’t really mean she would have to pay the vet’s bills, it just popped into my head.

Robert chimed in, “Listen to your mother, Kaylee. Owning a dog is a big responsibility. Whatever your mom decides will be the right thing.” Thanks a bunch for your fatherly support, Robert.

Anyway, that was three days ago, and now it’s Saturday, and Kaylee and I are sitting in the car outside Lillian’s farmhouse, ready to embark on the biggest mother/daughter decision we’ve ever made together: How do we choose the right puppy?

Lillian met us at the door, beaming down at Kaylee, unaware of the pressure I was feeling about the near-impossible task we were about to face.

“Come in, both of you, it’s so good to see you! I’m very excited, Kaylee, you will be our first ‘puppy mommy’ for some lucky furball from this litter. You get the pick of the whole litter!” she chirped as she led us through her long farmhouse kitchen to the back door.

So much choice. My anxiety just went up a notch.

Kaylee was beaming from ear to ear. It seemed as if a lighthouse beam of light was radiating from her innermost being. She was way beyond excited. (We had agreed on names ahead of time; Jasper for a boy dog, and Jasmine for a girl, so at least that decision had been settled.)

We heard them as soon as the back door opened. The stone courtyard, littered as usual with hay, chickens, weeds, and empty bird feeders, was now a playground for the happy-to-be-alive, plump, waddling, baby canines.

I was glad I had advised Kaylee to wear her oldest jeans and Wellington boots. The mayhem that ensued proved my wisdom, which was quite satisfying for a moment. My daughter immediately flung herself to the ground with a squeal of delight and was surrounded by a heaving mass of small, furry bodies, all eager to greet their visitors.

Lillian and I stood together and watched the scene. My friend had the widest grin on her face that I had ever witnessed. And I’m certain that my face said, ‘Oh fudge, this is really happening.’

“Look, Mommy, look at them all! They are adorable! Come and see them!” said Kaylee as she giggled and played with as many wriggling puppies as she could get on her lap. I had to admit they were super cute.

“Auntie Lillian, I thought you said there were seven puppies but I can only count six. What happened to the other puppy?” asked Kaylee with concern as she turned to look up at my friend.

“Oh, there are seven, but I left the little runt with his mother. I wanted you to choose from the best of the litter. You don’t want the runt, he has a limp. I think his mommy must have laid on him when he was first born and it affected one of his hind legs. You enjoy picking your doggie from these little guys.”

I don’t know why to this day, but when she told us about the poor unfortunate limping runt I knew in the deepest recesses of my heart that he was going to be our dog. Why God, why? The revelation shocked me into silence for several minutes.

Kaylee continued to play. We continued to watch. Until suddenly, my daughter put the puppy on her lap to one side, stood up, and asked,

“Auntie Lillian, please may we go see the runt?”

Nooooo! I thought. The panic inside me rose up like a volcano about to explode. Or was it excitement rising? Now there was an emotion I hadn’t expected today. I was suddenly, inexplicably, feeling excited about seeing the little, limping runt.

Lillian shrugged her shoulders and looked at me to see if I was okay with Kaylee’s request. I nodded, and we followed Lillian into the breeding kennel where the puppies had been born eight weeks earlier. It smelled of hay, dog hair, and horse manure all mixed together.

Lillian called out to the female tri-colored collie who had bravely squeezed these four-legged furballs out into the world all on her own. She obediently left the large wooden dog bed in the corner where she had been resting and trotted to her master, tail wagging. Following close behind was what can only be described as the most adorable animal I had ever seen.

His whole body waddled after his mother with an endearing lurch from the result of his limping back leg. His not-quite-developed tail was high and flailing around like a windmill in great expectation of good things coming. His dark brown eyes were kind and sparkled with life and he didn’t seem a bit afraid. Of course, he looked thinner and smaller than the rest but I could tell right away; this dog was all heart.

Kaylee knelt down gently to stroke the older dog first, seeming to ask her permission to approach the little one. It must have been a yes, because, in an instant, the pair came together, girl and puppy, in the most joyful introduction I have ever seen.

We both knew at that moment that this little runt was indeed ours. He belonged to us.

Kaylee looked up at me with pleading eyes. “Mommy, this is the one. This is my doggy!”

I looked down at her with tears in my eyes. “Yes, my love, you are absolutely right.” Then, I knelt down on that dirty floor next to my daughter and introduced myself to Jasper.

“Jasper, I’m so pleased to meet you. Would you like to come home with us today?” His little face lit up as he cocked his head to one side making his right ear flop forward over his eye. I think it was his way of saying yes.

Kaylee took my hand and squeezed it tight as Jasper sat on her knee and chewed on the ends of her long, blond hair. There were tears of joy running down her cheeks.

“Thank you, Mommy. Thank you for choosing Jasper!”

We both knew we had made the right decision that day.

Have a short story you’d like to see published in The TALE? Send your submissions to articles@theloopnewspaper.com with the subject line: TALE short story, and you may see it in The Loop!