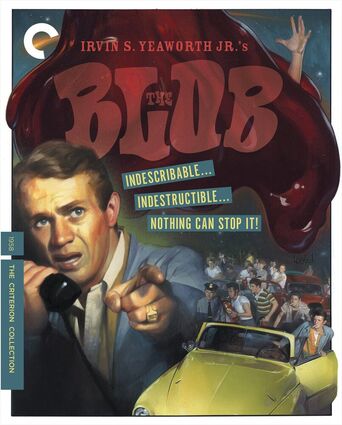 On this, the spookiest of months, I watched the classic science fiction horror film "The Blob" (1958) starring Steve McQueen (directed by Irvin Yeaworth). The film takes place in a small town, not unlike our own. One night, Steve and his date Jane are stargazing when they witness a meteorite crash down and land outside of town. Inside the meteorite is an alien ooze. This blob goes on a human-consuming rampage across the small town, culminating in a final showdown where the blob attempts to consume an entire diner.

This film is exactly what I imagined when first envisioning this column. It was made in such a different time that its tropes and logic are foreign to me and not what I expected. Early in the film, the police and the town hooligans are positioned to be antagonists to Steve and Jane. The hooligans are easily insulted by Steve and intimidate him into racing them. Officer Dave is poised as an antagonist by catching Steve in his street race. These characters could easily become secondary villains to terrorize Steve and Jane, only to be swallowed by the ooze. Instead, Steve just befriends most everyone he meets. The hooligans call Steve a friend after their race and are extraordinarily helpful when Steve needs to rally the town. The officers are more antagonistic and consider locking Steve and Jane up but settle on just sending them home with a warning.

We don't, however, watch monster films for the people; we watch them for the monsters. Modern horror films will usually have some moral lesson built into its story or creature. Slasher films will have the promiscuous or debaucherous characters murdered by the serial killer. Monsters will be personifications of greed or embody an existential terror of the day. The blob is an uncomplicated intergalactic goo that wants to eat its preferred snack, humans. While poorly animated to our modern sensibilities, the effects were acceptable for the times.

The movie had very few antiquated moments that don't age particularly well. The dialogue is mostly respectful and the characters are very wholesome. However, when the monster is bested by the town, freezing it with fire extinguishers, they decide to drop it in the Arctic because it will never melt.

Even though the acting was sub par and the effects left a lot to be desired, this wholesome romp around a mid-century small town was enjoyable in its own way. This in no way is Steve McQueen's best performance and the rest of the cast isn't notable either. However, I would recommend it as a background movie for your upcoming Halloween party.