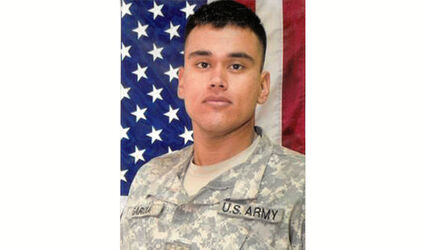 (Note: This is the 25th article in a continuing series about local military veterans and their service to our great country.)

Alberto was born on March 9, 1984, in Delano, California. He grew up in Bakersfield, California, raised by a single mom (Maria Garcia). Alberto was the youngest of three children, having two older sisters, Mercedes and Veronica.

He attended Vista West High School in Bakersfield, a satellite institution of South High School. While Albert didn't participate in sports formally in high school, he loved baseball and was a big fan of WWF wrestling. He particularly liked the "Rock" (for those who don't know, Dwayne Johnson, a.k.a. the "Rock," was a wrestler before he became a mega-star actor) and was so enthusiastic about the WWF that he even got his mother watching the matches!

When asked what she remembered most about her son's high school years, Maria replied without hesitation, "He got along with everyone. He was always helping people. He had lots of friends in high school. Whenever I picked him up from school he was always surrounded by his friends. They called him 'Malachi' in high school – a biblical name that was an expression of Alberto's religious faith." (Malachi was a messenger or angel, the last of the minor prophets, and the writer of the last book of the Old Testament canon, according to http://www.biblestudytools.com.)

Alberto's many interests included tattoos, hot rods, motorcycles, comic books, punk rock and, not to be overlooked, he was a huge fan of Johnny Cash. He was an active member of the Valley Bible Fellowship Church, often patrolling church grounds, praying, and ministering to others. He kept his love of the Lord at the center of his life. In the military, on his MySpace page, two of the people that he said he'd like to meet someday were God and, you guessed it, Johnny Cash.

As Maria explained, her son also loved all things military and was determined to join the Army. Indeed, he was a patriot who had always wanted to serve his country as a soldier. When his mother said, "But, Alberto, we are at war [in Afghanistan and Iraq]; you could be killed!" He replied, in his gentle but firm manner, "But mom, I could be killed anywhere at any time. I need to do this." In fact, time and again he would tell his mother and his sisters, "I need to do this." While he never explained exactly what those five words meant, his mother knew: Alberto was expressing his deep love for God and his country.

Alberto enlisted in the Army on July 26, 2005 (he had worked hard to achieve the ideal weight and to pass the testing required to join the Army). He graduated from One Station Unit Training as an 11B Infantryman assigned to "G" Company, 1st Battalion, 19th Infantry, at Fort Benning, Georgia. He was then assigned to "C" Company "Rock," 1st Battalion, 26th Infantry (the "Blue Spaders"), 1st Infantry Division, in Schweinfurt, Germany. The 1st Infantry Division (the "Big Red One") was an elite formation – a combined arms division that is the oldest continuously serving division of the Regular Army, having seen continuous service since its organization in 1917 during World War I (it had landed at Omaha Beach in Normandy, France, on June 6, 1944).

Alberto arrived in Germany in early December 2005. Yet with America at war with al Qaeda terrorists (and other assorted miscreants) in Iraq, he was only too aware that it wouldn't be long until he and his unit were also in combat there; and, on August 4, 2006, Specialist Garcia ("Specialist" is a junior enlisted rank) and the "Blue Spaders" deployed in support of Operation Iraqi Freedom.

In Iraq, Alberto – or "Berto," as he was affectionately known to the other soldiers in 1st Platoon, "C" Company – took part in numerous combat patrols in Adamiyah (eastern Baghdad) in support of Operation Together Forward II and the Baghdad Security Plan. He was a dedicated soldier, who "displayed unwavering courage and commitment to his unit and the United States Army." (Task Force 1-26 Infantry, Memorial Ceremony, 20 March 2007, SPC Alberto Garcia, Jr.). Always the dutiful son, during his service in Iraq he kept in close touch with his mother, often sending her money.

On March 13, 2007, while conducting combined security operations in Baghdad, his platoon was struck by enemy small arms fire. In the ensuing combat action, Alberto lost his life as a result of fatal wounds caused by the detonation of an improvised explosive device (IED). He was 23 years old.

At his memorial ceremony in Iraq on March 20, 2007, fellow soldiers of Task Force 1-26 Infantry ("Blue Spaders") poured out their love and respect for Alberto. Some of their remarks are noted below.

"He was tall, soft spoken, and a devout Christian. He loved God and his family and was not embarrassed to publicly display his love for both. Like many soldiers, Alberto fancied tattoos. He was very proud of his first tattoo, which was an image of Christ....

"The soldiers of Task Force Blue Spaders are fighting in a very difficult and unforgiving sector of Baghdad, and the soldiers of Charlie 'Rock' Company know this all too well. This past month marks over 7 months of combat service in Northeast Baghdad and our fight in Adhamiyah has been marked by emotional highs and lows. Charlie 'Rock' has been especially successful in capturing numerous high value targets and the discovery of weapons caches, however they also know all too well the pain associated with losing a fellow comrade to a shameless enemy.... Alberto was the sixth soldier lost from this great company...Alberto was scheduled to fly home next month to see his family for a long awaited R&R [rest and relaxation]." - LT Schacht (Battalion Commander)

"SPC Garcia was an integral part of 1st Platoon. His sense of humor entertained us, his positive attitude motivated us, his Soldiering impressed us, and his faith inspired us....

"Almost everyone I've talked to in 1st Platoon said the same thing about Alberto. They said 'Berto' was loved by everyone... He was one of those quiet guys who'd not really talk to you until he got to know you, but once he did and he opened up to you, you'd discover a guy that was funny and caring and grounded in his faith in the Lord. You could always count on him for anything...

"As a leader, you couldn't ask for a better soldier than SPC Garcia. He was disciplined, reliable, quick to learn, aggressive, tough, and never complained. He'd come off a long patrol, and while other guys were starting to relax, Garcia would be squaring his gear away, preparing himself to roll out on the next mission. And when he was done squaring his gear away, he'd hit the gym to square his body away, even if it was 3 in the morning. When I assumed command of Charlie Company, one of the things that I told them that was important to me was soldiers living the Warrior Ethos. Specialist Alberto Garcia, Jr. WAS the Warrior Ethos. He always placed the mission first; he never quit; he never accepted defeat; and he never left a fellow soldier in a time of need." - CPT Strickland (Company Commander)

"I was extremely fortunate to have SPC Alberto Garcia as a member of my squad. He was a soldier that made an NCO's job a little easier. He was a very dependable and loyal soldier. Alberto loved the physical part of being a soldier. You could always find him at the gym late at night. He never complained about how tired he was. He was a soldier who just kept going... He always made everything easier for everyone.

"He was a fast learner and he enjoyed learning as much as he could. He also loved to play his guitar. Although he just started a few months ago, for a beginner he played extremely well. I remember showing him some basic chords and the next thing I knew, he was teaching me some Johnny Cash songs." - SGT Richardson (Squad Commander)

When Captain Strickland went through SPC Garcia's personal belongings, he found a small pocket-size Bible stained with Alberto's blood, as well as a piece of paper with several references from Scripture. One of the references was to Psalms 71:1-8, which includes the words: "In you, O Lord, I have taken refuge; let me never be put to shame. Rescue me and deliver me in your righteousness; turn your ear to me and save me. Be my rock of refuge, to which I can always go; give the command to save me, for you are my rock and my fortress... I will ever praise you." 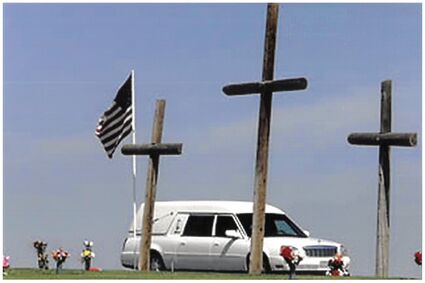 The hearse bearing Alberto Garcia, Jr.'s remains at his funeral.

The loss of SPC Garcia motivated his band of brothers in "C" Company to search out, kill and capture those responsible for his death. At 8:30 a.m. the next morning, 2nd Platoon located a suspicious house with a secret room containing several anti-tank mines, over 300 gallons of nitric acid, and more than 125 pounds of homemade explosives. Although the insurgents who had prepared this "recipe for destruction" were nowhere to be found, the platoon provided security for an explosive ordnance disposal team that destroyed the house in a controlled demolition – not only avenging Alberto's death, but most likely saving the lives of other members of his company.