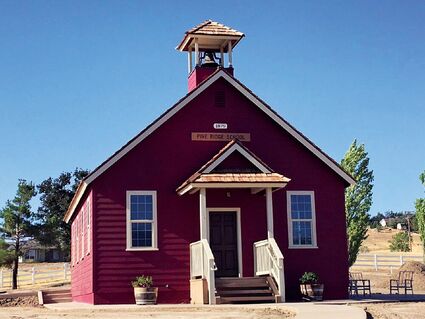 The dream come true, the Pine Ridge School. Beverly Lara completed an iconic project of a rendition of a 19th century schoolhouse on her property in Oak Knolls in August 2020 after many years of research and preparation.

The building conforms to current building codes and is also wheelchair accessible. When she is working in her yard or glancing out of her home's windows, Beverly has noticed many vehicles driving by slowly looking at the schoolhouse. If she sees them when she is in her yard, she invites them to stop and take a small tour of the building. She remarks that no one has ever said no and the one thing they all have in common is that no one has ever walked through the front door without a smile on their face.

Beverly explains what "possessed" her to have this building built. She comments, "The first two questions people ask are: Are you a teacher and why did you do this?" She explains that several years ago she and her husband had talked about building a 19th century model of a little white country church, however, they did intend to use the building as a guest house. Her husband thought better of it and proposed that it might be sacrilegious to use a church as a guest house.

Upon reflection, Beverly thought it would be more appropriate to build a schoolhouse. She learned that schoolhouses were focal points in many communities; everything happened in the schoolhouse. School was held Monday through Friday, church on Sundays and town hall meetings were held there, as well. After doing research on what took place in Tehachapi around the later 1800s she discovered that several schoolhouses were built in the area during the 1800s, including the Bear Valley schoolhouse in 1872 and the Cummings Valley schoolhouse in 1873. There were also several small school districts formed throughout the greater Tehachapi area, from the Cameron Canyon area down to Keene, during that time period through the beginning of the 20th century.

It took Beverly several years of research before she began the project with Jim Keller of Keller Construction in July 2019. She took trips to sites of many 19th century models and original schoolhouses, including Calico Ghost Town, Pioneer Village and Knott's Berry Farm. Beverly and Jim designed the schoolhouse together and he commented that he had a lot of fun with the building. It was a collaboration of what he knows how to do, his ideas and what she wanted. During her trips Beverly had taken many notes and photographs and even measured the buildings, which was of great help to Jim.

Beverly has been collecting artifacts for years, Jim says. For example, she purchased a 250-year-old cast iron school bell, which is mounted in the belfry. When she could not get authentic items, she purchased ones as close to originals as possible.

Beverly and her husband already had a pad on the property that their son had used for soccer when he was in high school. Jim cleared off the weeds and began building. All who worked on the schoolhouse were locals: Gabriel Elizondo assisted Jim with the framing; Jerry Mulkins laid the tile; Ron Christy Excavation dug the septic; Ray Memoli of A-1 Air Conditioning & Refrigeration installed the air conditioning and heating; Benny Hensler of Hardwood Installation & Restoration installed the hardwood flooring; Moe Farhadi of Custom Wood Finishes antiqued the kitchen cabinets and the outside of the shower stall; Fassbender Roofing installed the roof; Louie Lomonaco of Louie's Plumbing supplied the building with modern indoor plumbing; Ernesto De Zubiria of First Call Electric brought the building into the 21st century with state of the art electricity; and Eaton & Sons Concrete, Inc. poured the concrete and performed the flatwork.

Beverly also requested that Jim install red exterior siding on the southern inside walls of the kitchen and bathroom so those rooms would look like additions. An 1880s schoolhouse would not have had an indoor bathroom or a kitchen. In the open classroom of the schoolhouse there are authentic-looking oil lamps, which came from a company in Southern California that provided the lighting for some of the buildings at Knott's Berry Farm, but there is modern lighting in the kitchen and bathroom. The bathroom shower has tile inside the shower which matches the antiqued wood on the outside walls which looks like old, wet barn wood. The only other modern convenience, besides electricity, is a television and DVD player hidden behind the sliding chalkboard.

Beverly asked family members and friends for their opinions on what to name the schoolhouse but as she lives on Pine Ridge Drive she thought it appropriate to name it the Pine Ridge School. The year 1879 is placed under the school's name on the front of the school. Beverly chose that year because that year is exactly 100 years before she and her husband got married.

Once completed, the schoolhouse has been used as a private family venue for Easter and Thanksgiving celebrations, birthday parties and her niece's child's blessing. Currently, the school is hosting a private preschool as Beverly's niece and a couple of her friends wanted to homeschool their preschool children together. No child in their group is over the age of five.

The schoolhouse is truly a one-of-a-kind landmark in Tehachapi. Beverly is hoping to find a safe and legal way of sharing this beautiful building with the community.