The flight of the ancients continues. . . 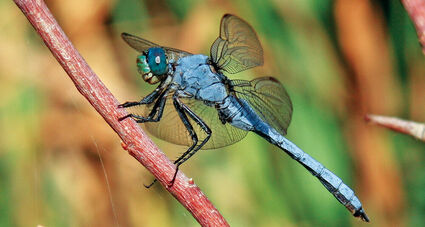 A male Western Pondhawk has a green face, blue eyes and powder blue thorax and abdomen.

Among the most interesting insects to be found in the Tehachapi Mountains, or anywhere for that matter, are the translucent-winged dragonflies.

Since dragonflies always lay their eggs in or near water, aquatic habitats are necessary for dragonflies. The dry Inland Ranges of California are not known for their abundance of aquatic habitats, of course, but dragonflies can often utilize small ponds, pools, seeps, etc. You can also find some adults quite a distance from any surface water.

The Dragonfly order is known as Anisoptera, and is one of the oldest animal orders still roaming the planet. Dragonflies can be found in the fossil record dating back 200 million years. Dinosaurs have been gone for about 65 million years, but dragonflies have been patrolling the skies for an inconceivable length of time, and they continue their flights to this day.

The Tehachapi Mountains are home to at least a dozen species of dragonflies, and observing dragonflies is one of the definite pleasures of spring, summer and early autumn. The Nuwä (Kawaiisu or Southern Paiute) people of the Tehachapi Mountains call dragonflies by the name kazibünoozi, pronounced kah-zi-buh-NO-zee, and these charismatic insects were the inspiration for a traditional Nuwä basketry pattern.

Dragonflies are larger than most insects, with bodies that range from an inch to over 4 inches long, so it's fairly easy to follow dragonflies with your eyes and see where they go and what they're doing.

Two pairs of stiff, usually-clear wings allow dragonflies to fly, and they are superb in flight - they are like the hummingbirds of the insect world, able to hover, fly backwards and dart about catching small prey insects on the wing. Few insects can compare with amazing flying abilities of dragonflies.

The dragonflies most commonly seen are males, and they often perch near standing water so that they are present to mate when a female comes to lay her eggs. A male dragonfly will stake out a territory and then land on vegetation and wait for either a female to woo or a rival male to chase off. They periodically leave their post to patrol for intruding males or check for females, but then will return again and again to the same few perches.

Dragonflies seldom bother about males of other species, which of course aren't competing for the same females, but when a rival that resembles themselves cruises by, the homesteading males try to chase the newcomer away. This predictable aspect of dragonfly behavior makes it easy to observe them as they perch, patrol, chase outsiders away and then return to land again in the same approximate place and wait vigilantly.

The males of most dragonfly species are on guard so much of the time that they don't even eat once they mature, instead spending their days in constant vigilance. They exhaust themselves with territorial battles, and by the end of the season there aren't many surviving males.

There are approximately 60 species of dragonflies in California, representing seven different families. They all begin their lives as tiny eggs that the females deposit into water or mud. The little dragonflies, called nymphs, look like little insect-eating monsters, which they are. The dragonfly nymphs live from three months to as long as three years beneath the water, catching other aquatic insects and devouring them. In order to grow, they must molt and emerge from their old shell. This happens 10 times or more.

Ponds and lakes with lots of fish, or with a thriving population of resident ducks, seldom support dragonflies. This is because both fish and ducks will eat larval dragonflies, as well as compete with them for insect prey, and also eat the aquatic grasses that larval dragonflies need.

When they at last mature, the final dragonfly instar (larval stage) crawls out of the water onto a cattail stalk or other vegetation, often at night when fewer predators are present. Like a butterfly emerging from a chrysalis, the adult dragonfly exits the shell of its former existence and takes wing, exploring its new surroundings and hawking insects.

Like summer itself, the adult dragonflies never last long enough: they only live for a matter of weeks once they become flying adults. They may feed at first, but in the ensuing weeks, they mate when possible and then die, usually in the vicinity of the pond where they laid eggs (in the case of females) or at least fertilized them (if they were males). 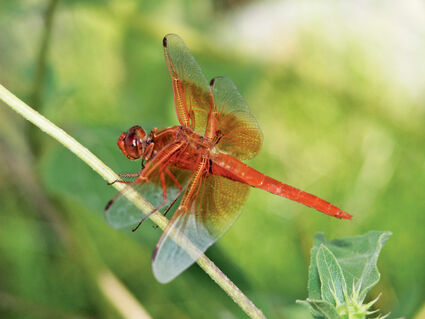 Keep your eyes open for the ancient dragonflies, and keep enjoying the beauty of life in the Tehachapi Mountains.