Adam O. Zanutto: U.S. Marine and American hero who perished in the war in Iraq 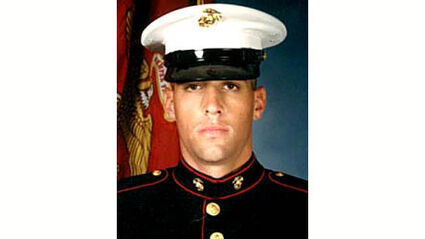 (Note: This is the twenty-third article in a continuing series about local military veterans and their service to our great country.)

Adam was born on November 6, 1979, in Bakersfield, California to Richard and Donna Zanutto. He spent most of his much-too-short life in Walker Basin, a valley in the Southern Sierra Nevada with magnificent scenery and spectacular sunsets that locals long ago had christened "God's Country." More specifically, he grew up outside Bakersfield in the town of Caliente, a ranching and farming community where his father had a hay farming business.

Adam attended Piute Mountain School in Twin Oaks from kindergarten through the eighth grade. The tiny school – just 100 or so students and five classrooms in Adam's time there – is quite unique, as it was built largely underground (in the early 1980s) in an effort to make it more energy efficient; only the south-facing windows, with a breathtaking view of the mountains, are discernible from the outside. Of course, the playground is above ground, and today is named in honor of Adam ("Adam's Playground"). His mother worked at the school for 25 years as a librarian and paraprofessional (teacher's aide).

"When Adam came home from school, he'd move sprinklers in the alfalfa fields, or he'd rake hay," his father recalled. "He was always working with me on the farm. No matter what I asked him to do, he never complained. He always did what needed to be done, and I think that's one reason he was such a good Marine."

As a youngster, Adam played AYSO soccer and Little League Baseball in Lake Isabella, even pitching a no-hitter on one occasion. "His coach gave him the game ball and we still have it after all these years," his father said.

His love of sports, leadership skills, and competitive drive were also evident at Foothill High School in Bakersfield, where he played soccer and one year of football. On his high school soccer team all four years, Adam would unselfishly dish out assists to his teammates. In fact, he was happier to assist on a game-winning goal than he was to score it.

After graduating from high school in 1998, Adam attended Bakersfield College, where he took classes in criminal justice that would help to mold his desire to serve his country. Adam always possessed a love of our country's history and many sacrifices for freedom – convictions shaped in part by watching the History Channel and iconic films such as the "Sands of Iwo Jima," "Black Hawk Down" and "Band of Brothers."

The tragic events of September 11, 2001, deeply affected Adam and strengthened his eagerness to serve. In October 2002, he enlisted in the Marine Corps; he did so not only to support his country, to protect our freedoms, but to honor his family's tradition of military service. "It was almost like a calling for Adam. He had cousins and uncles who had fought in World War II, Korea, and Vietnam," his father, a Vietnam veteran, explained. "He was intrigued by my experiences in Vietnam. He would see my [Army] uniform hanging in the closet, look at my photographs. And he really took an interest after 9/11. Adam was a very quiet person, he didn't talk much, but that day clearly had a tremendous impact on him. He put his dreams and aspirations on hold to join the Marine Corps. It's like he felt compelled in some way to join."

Adam went through basic training at Camp Pendleton, one of the largest Marine Corps bases in the U.S., on the coast of Southern California (San Diego County). After basic, he completed his Advanced Infantry Training (AIT), also at Camp Pendleton, with the Military Occupational Specialty (MOS) of infantry machine gunner. He was then transferred to the Marine Corps base at Twentynine Palms in the Southern California desert. Here he was assigned to the 3rd Battalion, 7th Marine Regiment, 1st Marine Division, I Marine Expeditionary Force.

Operation Iraqi Freedom began on March 19, 2003, with preemptive airstrikes on Saddam Hussein's Presidential Palace and key military targets. Iraqi ground forces were rapidly overwhelmed and Baghdad seized barely five weeks later. Yet what at first appeared to be a brilliant victory for U.S. arms, soon deteriorated into a protracted insurgency, as al-Qaeda fighters poured into the country and unleashed a tenacious guerrilla war.

Corporal Zanutto would see three tours of duty in Iraq. His first tour, in 2003, took him to Karbala and was of seven months' duration. After returning home on leave for a short period, he soon found himself right back to Iraq – this time (2004) to Al-Qa'im, near the Syrian border, where his regiment sought to prevent the infiltration of al-Qaeda fighters into Iraq. His third tour (2005/06) was in Ramadi, west of Baghdad, in Al Anbar province, a hotbed of terrorist activity. On July 4, 2005, shortly before returning again to Iraq, Adam had tied the knot with his sweetheart, Amber.

In addition to training as a combat infantryman, Adam had earned his Emergency Medical Technician (EMT) certificate in the Marine Corps and, on January 5, 2006, he put those skills to good use, assisting in a mass casualty evacuation at a glass factory in Ramadi where a suicide bomb attack had killed or wounded over 100 Iraqi civilians. For his actions he garnered the Navy and Marine Corps Achievement Medal.

Adam was now a Marine squad leader, a tribute to his knowledge and leadership skills. He and his men were often out on patrol and, as many of his fellow Marines would later attest, he had a way of calming their anxieties before a mission. He approached his responsibilities with the utmost seriousness and preparation; indeed, before beginning his tour in Ramadi, while still at home between tours, he and his father had gone to a Kinko's print shop in Bakersfield to have some maps of the terrain in Al Anbar province printed and laminated. Adam wanted to study the terrain before his deployment; he also wanted to have maps at his disposal that would hold up better – better than those provided by the Marine Corps – under the harsh conditions in the Iraqi desert.

On February 23, 2006, Adam sent an email to his parents. He was eager, he said, to return home, to his parents and his new family (his wife had two children). He noted enthusiastically that he only had 27 days left in Iraq.

Two days later, February 25, Adam and his squad were out on patrol in Ramadi. One of the lightly armored, four-wheel drive military vehicles – colloquially known as "Humvees" – in his column suffered a mechanical breakdown, forcing Adam's Humvee to turn around to check out the problem. At some point, his vehicle struck a roadside bomb. Adam was severely wounded and flown back to the National Naval Medical Center in Bethesda, Maryland, where he died of his wounds on March 6, with his wife and mother at his side. Adam, 26, was laid to rest at Hillcrest Memorial Park in Bakersfield. He was one of nearly 4,500 U.S. servicemen and women to die in the Iraq war through 2019. (Note: Adam was posthumously awarded his sergeant's strips by the Marine Corps; he had studied for, and passed, the sergeant's test.)

That Adam was respected, even loved, by the Marines who served with him is underscored in these heartfelt remarks of Sgt. Judson left on Adam's online memorial page, http://www.fallenheroesmemorial.com/oif/profiles/zanuttoadamo.html:

"I wasn't gonna do this but I can't let it go, I miss this guy so much. If anybody reads this these are some things they should know about him. Adam...first of [all] a great man, a great man makes a great Marine. His sense of humor, his personality...just a great guy. He took care of the guys beneath him and trained them the best he could, stern but approachable. The day I saw him in pain will never leave me and I've been in pain ever since. It hurts to lose somebody but a friend and a leader is even worse. My heart goes out to his love and his family. He was everything I want to be and more and I miss him every day. My deepest condolences and sorrow."

Adam had been scheduled to be discharged from the Marines in October 2006 (his wife, Amber, had moved to Bakersfield to prepare for his return). His career aspiration was to become a Kern County Sheriff's deputy.

An American flag had flown outside the Zanuttos' family home all of Adam's life. "If I'd miss a day, he would be out there to put it up," his father Rick said. The day Adam died, Rick said, "The hardest thing for me to do in my life was lower that flag."

In 2007 the Zanuttos moved to Tehachapi. Rick's brother and wife live in Tehachapi and among Rick's careers was a stint as publisher of a periodical called The Fence Post, which covers Kern County history. This gave him and his wife, Donna, the opportunity to become well acquainted with Tehachapi. 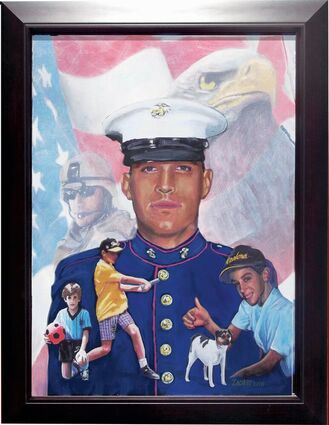 On October 7, 2020, the Major Jason E. George VFW in Tehachapi presented a Gold Star to Rick for the loss of his son Adam in Iraq.

(Note: A portrait of Adam, resplendent in his Marine Corps dress uniform, painted by Thomas Zachery, hangs proudly in the Portrait of a Warrior Gallery in Bakersfield. It was the very first portrait painted for the gallery.)