Pandemic no match for 'Nunsense' 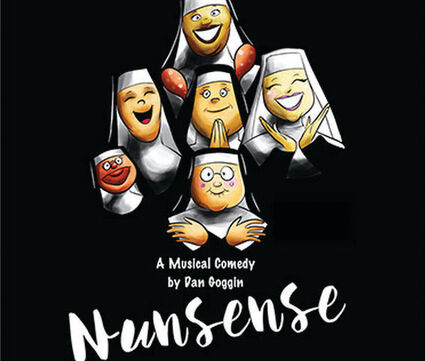 The hit musical "Nunsense" may be a smaller show in the number of actors on stage, but there are certainly no small parts in this musical comedy.

"It's a small cast show, but a very demanding show. They have to sing, dance, act, work props and costumes and play characters all at the same time. They do it all," said veteran Tehachapi Community Theatre (TCT) Director Doug Jockinsen.

Jockinsen has been participating in theater for 54 years, but the pandemic has mostly kept him and his children at home for the past 18 months. "It's wonderful to be able to get that part (of me) going again," he said. "As an older person, we're a little more panicked than other groups (regarding COVID-19). But it's nice to get out and be comfortable about getting out."

The pandemic also did a number on TCT's schedule of shows for last year and this year. The theater group as able to present "Young Frankenstein" and "Trip to Bountiful" during the beginning of 2020. But then the pandemic shut down the BeeKay Theatre and TCT for what has now been 18 months. As "Nunsense" was just a month from opening when the shutdown happened, it will be first up to re-open the season and the BeeKay again to the community of Tehachapi.

The cast had to wait and wait. Auditions took place in early January of 2020. Since then two of the five-member cast had to drop out (one had her first child) and those parts had to be recast even though open rehearsals could not be held. "It has been difficult to say the least", Jockinsen says. He also said he is blown away by the talent of the original cast and the cast in place now. "Tehachapi is so fortunate to have so much great talent. I'm excited to have these five ladies," he said. "Others auditioned and they were very talented, also."

The show follows the misadventures of five nuns trying to manage a fundraiser. Sadly, the rest of the sisterhood died from botulism after eating vichyssoise prepared by Sister Julia Child of God. Thus, the remaining nuns – ballet-loving Sister Leo, street-wise Sister Robert Anne, befuddled Sister Mary Amnesia, the Mother Superior Sister Regina, and mistress of the novices Sister Mary Hubert – stage a talent show in order to raise the money to bury their dearly departed.

The show is a gentle send up of Catholic humor and it also gives a different perspective of nuns. "Nunsense" first opened in 1985. It ran for 10 years and 3,672 performances, becoming the second-longest-running Off-Broadway show in history, and an international phenomenon. "They are real people and they're funny and have a heart and have wants and needs, too," Jockinsen adds.

Jockinsen is also thankful for his crew for this show. He's worked with many of the crew members for years. Assisting on this show are Guy Martin as Musical Director; Jason Hansen as Stage Manager; Sierra Christian as Dance Captain; Opal Lawler-Martin and Leslie Reynolds as Set Designers; Tracy Silvers as Assistant Director and Backstage Manager; Dave Shacklock as Sound Board Tech; Kenny Chugg and Spot Light Operator; and Liz Block as Costume Mistress.

Tickets are $18 and are available online at http://www.tctonstage.com, and at both Tehachapi Furniture and Tehachapi Treasure Trove. A limited number of tickets may be available at the BeeKay Box Office, which opens 30 minutes prior to each show. Advanced purchase is recommended.