The time of acorns: late summer marks the start of acorn season 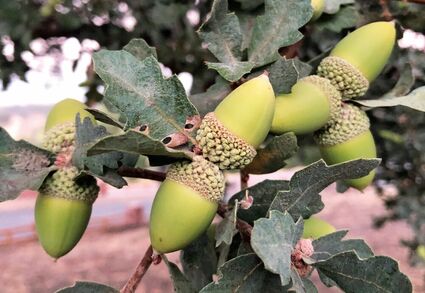 Acorns hang thick on a Blue Oak along Old Town Road this year.

Now that summer is beginning to look towards the coming autumn, oak trees in the Tehachapi Mountains are starting to produce the crop that sustained life here for thousands of years: acorns.

These distinctive, conical seeds are highly nutritious, containing significant amounts of carbohydrates, fats, protein and fiber, as well as minerals including potassium, magnesium, calcium, iron and vitamin B-6.

Animals of many kinds rely on the annual bounty of acorns to feed and nourish them, both now and in the winter ahead. Black Bears, California Mule Deer, California Gray Squirrels, Band-tailed Pigeons, Acorn Woodpeckers, both California Scrub and Steller's Jays and many others depend on acorns.

All of our oak species produce acorns, including the tree oaks like Valley, Blue, Black, Canyon and Interior Live Oaks, as well as the assorted species of shrub oaks, which drop small acorns.

But it is not just the wildlife of California that found acorns to be a vital food source. The First Nations people of our state also developed food systems that relied heavily on the yearly acorn crop. Dozens of different tribes depended on acorns as a dietary staple.

The primary people of the Tehachapi Mountains, the Nuwä (also known as Kawaiisu or Southern Paiute) straddle the border between two major lifeways: Great Basin Culture and California Culture.

Great Basin Culture tribes relied more on pine nuts and other food sources, since oak trees are not abundant in the eastern portion of the state and into Nevada, where most of the Great Basin is located.

California Culture groups however, which flourished in the interior valleys, foothills and along the coast, made great use of the acorn bounty. Anthropologist Alfred Kroeber estimated that acorns provided the main daily food of more than three-fourths of all Native California peoples. With the Great Central Valley, composed of the San Joaquin and Sacramento Valleys, home to enormous oak woodlands, the annual crop there was estimated to have been millions of tons of acorns annually.

When it comes to acorns, there were typically enough for all who were willing to do the work of gathering and processing them. I have heard Native people attribute the general peacefulness of California tribes to the abundance of acorns, which didn't lead to warring or raiding parties to battle over the food resource.

Acorns in their natural state are not palatable to humans. They contain tannins, or tannic acid, which make them bitter and will produce a belly ache. These can be fairly easily leached out with water.

Different tribes have different traditions when it comes to processing acorns, but the Nuwä typically did it in this way. First the acorns would be gathered, ideally when the first ones started to drop. The very first ones that drop usually do so because they have been damaged by insects, but tribal members would then shake lower limbs or tap them with a stick to dislodge fully mature but still green acorns.

Then the outer, leathery husk is removed to expose the pale nut inside. Sometimes the outer shell would just be cracked with a stone, and allowed to dry for a few days. This allowed the seed inside to shrink somewhat, making it easier to remove.

Once they are out of the shell, acorns were pounded in a pahazi, pronounced pah-hahz, the circular stone indentations found scattered all throughout the Tehachapi Mountains. These millings sites were made by Indian women over many years of work. The pahazi is the mortar and a cylindrical river rock known as a pahako'o (pah-hah-KO-oh) was used as a pestle.

Once pounded into a moist flour, like the corn masa used by Mexican people for their tamales, the acorn meal still needed to be leached. This was done by making a shallow depression in sand, perhaps three feet across and eight or ten inches deep in the center. This would be lined with the leaves of willow or other plants. In later years, transitional Nuwä women like Gladys Girado, who continued some of their traditional cultural practices well into the 20th century, would line their leaching pit with Gray Pine needles and then place a thin cloth made from an opened-up cotton flour sack on top.

Pounded acorn meal would be spread out in the leaching pit, and then water would be poured over the meal repeatedly. As water drained into the porous sand below, the tannins would be carried away. There are some reports of Native peoples using hot water, or alternating hot and cold water, but heating the water isn't necessary. Cold creek or spring water worked fine to leach the acorn meal. If you taste it and the bitterness is gone, the leaching is completed.

Once the tannins are removed, acorn meal is ready to use. Traditionally, it was cooked in a basket using hot stones. The basket was first soaked in water to swell the plant fibers, making the basket water-tight and resistant to scorching. Then the acorn meal and some water were added, then one hot smooth river rock at a time was added and stirred with a willow stick. Two or three hot rocks are usually all it takes to transform the acorn meal into a porridge-like consistency. At our Go Native Day celebrations in Tehachapi in the past, we have had Sandy Clark and Lois Conner Bohna demonstrate cooking acorn meal in a basket. 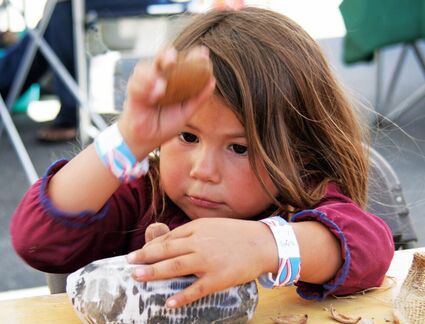 A little girl participating in a past Go Native Day uses a stone to crack an acorn shell.

Cooked acorn meal has a bland flavor, akin to the poi made by Hawaiian people. Some have described it as an acquired taste. If that's the case, I quickly acquired it, because I love the way acorn meal tastes. It has sustained California people for countless centuries, and is still made and enjoyed today.

Not all the oak trees are producing a heavy crop in this drought year, but I have seen some Blue Oaks that were practically dripping with acorns. May their seeds nourish any who consume them.