'Do the Math' takes a trip down memory lane, set to debut 20th season Sept. 14 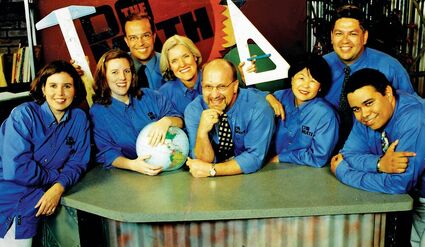 "Do the Math" original cast.

On March 13, 2002, officials from the Kern County Superintendent of Schools office and community partners gathered at KCSOS's downtown Bakersfield headquarters to launch a new educational TV program called "Do the Math." After nearly two decades and with more than 900 live episodes in the books, the program is gearing up for the start of its 20th season on Sept. 14.

"Do the Math" was the brainchild of former KCSOS employees Janis Jones, Coordinator of Afterschool Programs and Laurie Maclin, Coordinator of Instructional Media. The pair collaborated with several school district partners to determine the best way to provide an opportunity for students to receive homework help through direct instruction and phone tutoring. The group determined that its focus would be on mathematics because data confirmed that student performance in that area lagged other subjects. The result was the debut of a live, call-in TV program where several math tutors took problems from callers and solved them live on air. "Do the Math" aired its first episode on April 3, 2002.

Michael Cushine, a GATE teacher with the Panama-Buena Vista Union School District, has served as the show's host since the beginning. He said the show originally focused primarily on prealgebra and algebra – core competencies required for the High School Exit Exam – which was required for graduation from 2004 to 2015. The show later focused on problem solving through the Common Core State Standards.

"We have continually evaluated how we could keep the show fresh and relevant and have made many adjustments over the years," Cushine said.

"Do the Math" has realigned its focus over the past few years because of a renewed emphasis on Career Technical Education (CTE). In 2018, a new segment called "Math in the Real World" was launched to demonstrate practical applications of math concepts at local businesses and organizations. In June of 2018, "Do the Math" was honored with a Beautiful Bakersfield Award in the public/private partnership category.

"The idea is to get young people to understand that what they are learning in school will serve them well when they get into a career," Cushine said. "It isn't just about crunching numbers any longer. It's about problem solving. The goal is to show math at work. How it is used in the real world, in real careers, especially in STEM-related fields."

This season, "Do the Math" is partnering with the Kern High School District's new Career Technical Education Center (CTEC). Students in the video production program will work alongside "Do the Math" to make a series of "Math in the Real World" segments to explore how mathematic principles apply to CTEC's various career pathways – Biotechnology, Architectural Design, Engineering, Financial Services, for example.

The 20th season of "Do the Math" will begin on Sept. 14. The live TV show airs from 4 to 5 p.m. every Tuesday and Wednesday during the school year. "Math in the Real World" segments air every Wednesday. Special segments, guests and contests supplement the math instruction.

"Do the Math" is part of 60-plus hours of weekly K-12 educational programming aligned to state standards that is available through KCSOS's Kern Education Television Network (KETN).