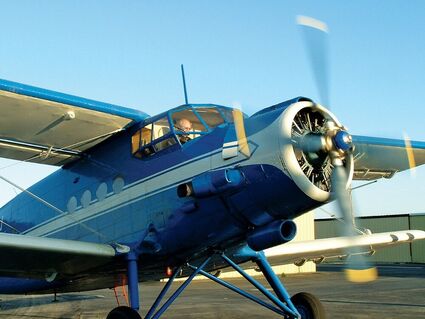 AN-2 running – Ron Sheardown in cockpit.

The Ukrainian AN-2 was initially developed as an agricultural aircraft and the first prototype flew on Aug. 31, 1947. The designer, Oleg Antonov, had been an aircraft designer during World War II. The aircraft went in production in 1949 and over 20,000 have been built.

The Antonov AN-2, sometimes called the "Ant," "Colt" or nicknamed the Kolkhoznik "Collective Farmer," is the world's largest biplane. The design gives it extremely short take-off and landing (STOL) capabilities, which is partly achieved not only by the high-lift double wings, but also by the use of the drooping ailerons, which can be lowered 20 degrees to compliment the flaps. Empty weight is 7,605 lbs., and maximum takeoff weight is 12,125 lbs. The upper wingspan is 59-feet, 7.75-inches and the lower wingspan is 46-feet, 8.5-inches. The fuselage length is 41-feet, 9.5-inches and the height is 13-feet, 1.5-inch.

This 1,000-horsepower, radial engine, 12-passenger An-2 has a very plush interior. Originally AN-2s operated in and out of short dirt fields, carrying everything from supplies, animals and passengers. Many AN-2s are former Aeroflot airliners.

There are four kick-in steps built into the Ant's aft fuselage that lead to a catwalk up the aircraft's spine, out the wings to the fuel tanks or over the birdcage windscreen to the oil reservoir. The oil tank holds 32 gallons!

The AN-2 has three-axis electric trim, but rather than trim-position indicators, there are three green lights that blink on when each trim tab is at its dead-neutral position. The ailerons and rudder are set by feel.

I love the sound of the engine starting, which is cranked by an inertial starter. The start up actually requires the pilot to have about four hands! One to prime with, one to operate the wobble-pump on the right side of the pilots seat, one to hold the inertial starter switch to the "on" position and as you pull the tee handle, it is necessary to feed fuel to the engine with the wobble pump as it roars to life.

Taxiing the Colt is interesting. The brakes are pneumatic (air driven), operated by a lever resembling a bicycle handbrake on the left horn of the pilot's yoke. Owner, Al, always taxied the big blue biplane slowly and cautiously, and the brakes hissed and groaned along the way. 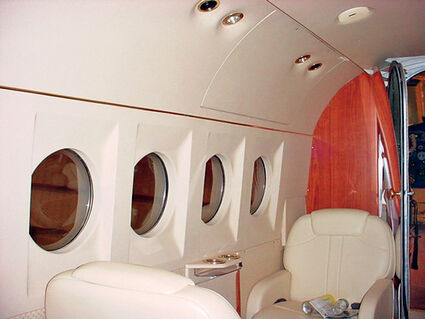 Interior of Hansen's AN-2.

The airplane almost takes itself off, three-point as it rises into the air like a balloon.

Hansen's AN-2 had many extras including an auto-pilot, and GPS with moving map. I remember some people remarking that the interior looked like a Lear Jet. I can tell you that it certainly smelled like it!

Soon the AN-2 that has sat at Mojave for years will be flying to a new home. Todd Schultz has been working on recovering sun damaged portions of the fabric and has it almost ready for flight.

It will be exciting to see another AN-2 in the air again.

See you on our next flight.