Looking back on the terrible Blackburn Canyon Fire 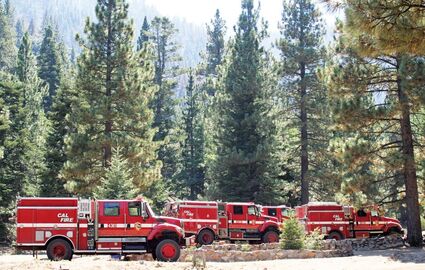 As the West in general, and California, of course, experience another devastating wildfire year in 2021, it reminds me of terrible fire that we had 10 years ago.

One of the most destructive wildfires that ever swept through the Tehachapi Mountains struck in September of 2011, destroying 32 residences and 30 outbuildings, as well as 19 cars and trucks and 19 RVs as it burned its way through 14,585 acres. Started by a Sept. 4 plane crash that killed both occupants of a small Cessna, the blaze was dubbed the Canyon Fire and it devastated one canyon and spared another.

The fire started in Blackburn Canyon in the Old West Ranch on property owned by the late George Plesko, who also lost a dwelling in a destructive fire the previous year. Smoke billowed high into the sky as the fire ravaged Blackburn Canyon, reducing large canyon oaks to pale ghostly skeletons surrounded by dark ash. As it laid waste to the flora of Blackburn Canyon, the fire headed west into the adjacent pristine Antelope Canyon, a steep sided, pine-studded oasis with a year-round creek.

Much of the land that burned was Antelope Canyon Ranch property, owned by the Wyman family and the home of the historic Summit Lime Company that quarried and processed limestone from the late 1800s into the early 1920s. As the blaze grew, the California Department of Forestry and Fire Protection threw greater and greater resources into the battle. The statistics listing the size of the campaign to stop the fire are incredible: 2,094 individual fire service personnel, 181 fire engines, 26 bulldozers, two airtankers and five helicopters. An army of firefighters attacked the inferno day and night, and by September 10, a week after it started, the fire had been halted.

In taking stock of what burned and what was saved, it became clear that as bad as the fire was, it could have been worse. Though Blackburn Canyon was left looking like a lunar landscape and many unfortunate residents lost their homes, the biggest, oldest oak tree in the canyon, at the 130-year-old Peter Tournot homestead site, seemed to have survived with relatively little harm. Located near a spring, the massive tree is a favored shade spot for James Mann's cattle and repeated grazing kept the fuel load low around the tree.

And lovely Antelope Canyon was almost entirely spared. Tongues of flame lapped at the east side of the canyon and nearly reached the canyon floor in a few places, but the private campground and historic remnants of the old limestone camp were left intact. As he drove around thanking fire crews for their efforts, the late Phil Wyman, a former state senator, found his eyes growing misty when he witnessed the unlikely survival of the rugged old Peter Tournot Oak in Blackburn Canyon.

As I have written before, we do have our own equivalent of a hurricane or tornado season, and it has nothing to do with earthquakes. Of course California, and particularly our part of this wondrous state, has seismic faults, but many decades can pass without a devastating earthquake. 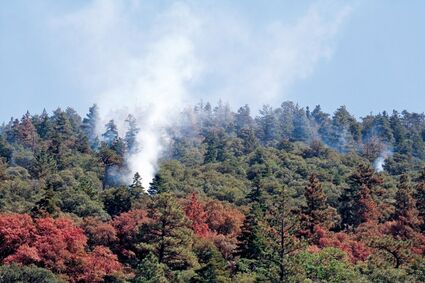 Even four days after the fire started, hot spots continued to smolder on the steep slopes of Antelope Canyon. Note the reddish stains in the foreground caused by fire retardant dropped from airtankers.

Every summer brings a potentially lethal wildfire season, however, and it is a gauntlet we must pass every dry season. A random and tragic plane crash provided the ignition source for the disastrous fire in 2011, but for all the heartache and pain it caused, it could have been worse. We need to be especially vigilant this year. All that a fire requires is fuel, oxygen and an ignition source. The dry fuel is certainly there, as is the oxygen. We just have to try to prevent ignition sources.