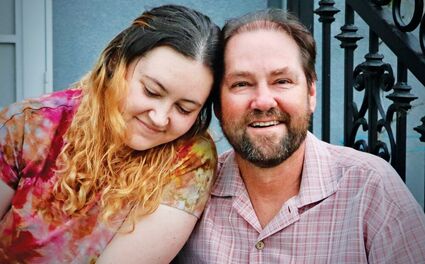 After almost 17 months of silence due to the Covid-19 pandemic, Tehachapi's intimate acoustic music venue, Fiddlers Crossing, will finally be alive with music for the monthly "First Friday" festivities on Aug. 6. This re-opening concert, will feature Los Angeles-based father and daughter singer-songwriter duo, Kevin and Kathleen Kelso. The show will begin at 7 p.m., with doors opening at 6:30 p.m. Admission is free, but tips for the performers are strongly encouraged.

The Kelsos are among a loyal group of singers, songwriters, poets and comedians who have been participating in a Zoom-based "open mic" that Fiddlers Crossing initiated shortly after the pandemic began in the Spring of 2020. Word of the online gathering spread quickly among Southern California's performing community and the group has become a tight-knit and very supportive family during these tough times for performers and venues alike.

After spending 25 years as an insurance company executive, Kevin Kelso turned his life around and now spends his time writing songs and playing poker. He has been featured numerous times at Harriet Schock's "Sunday Night at the Pavilion" singer-songwriter showcase in Los Angeles, and performs frequently in venues around LA.

A native of Indiana, in 2016 he premiered his one-man show "Prodigal Hoosier" in Indianapolis. His second show, "They're Laughing WITH Me, Right?" premiered in Tucson in 2017. Kevin's work has appeared on seven episodes of Paula Poundstone's "Nobody Listens to Paula Poundstone" podcast.

While he often writes in an Americana style, Kevin follows the song wherever it leads him, be it Broadway, rock or samba.

"A lot of my songs aren't sure whether they're tragedy or comedy; most are a bit of both," he says.

Kathleen Kelso has been singing all her life, first with her dad playing piano in the living room, then appearing in countless plays and musicals, performing with the National Children's Chorus and leading an a cappella group called The Unaccompanied Minors. She taught herself piano so she could back herself up while singing. Then, during the pandemic, she taught herself guitar, which helped her stay sane while opening up a whole world of musical possibilities.

In her songwriting, she, too, is inspired by many musical traditions, from musical theater to R&B to rock, but she feels most comfortable in indie/folk mode. She crafts her lyrics carefully, glad to be putting her creative writing degree to good use. Her biggest influences include Brandi Carlile, Elton John, Lucy Dacus and Kevin Kelso, of course!

With Kevin and Kathleen Kelso on stage, the evening promises to be one of warmth, humor and a much-needed sense of community after such a challenging time for all of us.

Since Fiddlers Crossing is a small venue, and given the current rise of the Delta variant, the management has decided to require proof of vaccination for entry. Please have your cards ready or flash it on your phone on entry.

Seating is limited so an early arrival is encouraged.

The venue is located at 206 East F Street, downtown Tehachapi.