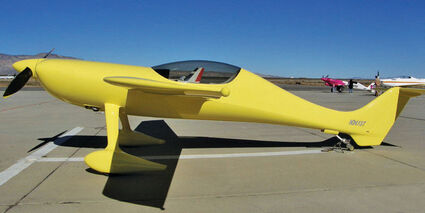 On the third Saturday of each month, local Mojave-based aircraft and planes from airports as far away as Carson City, Nevada come to participate. Participants with aircraft and visitors who drive to the airport enjoy the low-key, friendly atmosphere. Many pilots stay by their aircraft and answer questions.

Back in January 2009, the featured aircraft was Cory and Patti Bird's beautiful, flying work of art, "Symmetry."

Weather is sometimes an issue and at the 2009 March Plane Crazy we just squeaked by with good weather for Saturday. Fog in the L.A. basin kept many of our friends grounded on the south side of the mountains. The next day it snowed – horizontal blowing snow!

It seemed like Mark Street of XCOR caught the flying bug every hour or so and he would go out and jump into his Pitts biplane, taxi out to the intersection of runway 8 and 26, turn into the wind and leap into the air. He just loved to fly!

The 2009 April PCS produced 52 aircraft! Some were local MHV residents; many were from other airports, including: Van Nuys, Redlands, Fox Field, Camarillo, Tehachapi, Inyokern, Ancient Valley and Little Buttes.

Every Plane Crazy Saturday is different and there are always lots of smiling faces. MTM Founding Board Member, Alan Radecki, made this comment on his Mojave Skies blog, "Most aviation enthusiasts can remember a time when they first discovered airplanes, often because someone simply took them to an airport. In this high-tech, high-security world we now live in, opportunities to do that are becoming rarer, which I suspect is why this monthly event has become such a big hit in the local community." 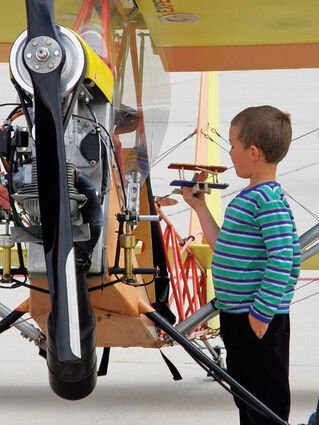 He also added, "You'll never know if you somehow influenced a kid to grow up and seek a career as a pilot or aerospace engineer!"

Thank you Mojave Air & Space Port for the opportunity to share our airport and our flying machines with the public.

Next PCS will be Saturday, July 17 and we will be saluting Mojave Air & Space Port's Fire, Crash and Rescue Team with MASP Fire Chief, Damian Farrar. He will give a presentation at 11 a.m. in the board room about the specially designed MASP fire truck. Seating is limited, so be sure to RSVP at info@mojavemuseum.org.

Kids love fire trucks. This event gives kids an opportunity to be up close to a special fire truck designed for aviation emergencies. Plane Crazy Saturday is a great place to make lasting memories.