Gillian Kingsley grew up in England, but moved to Tehachapi from Northern California right before Christmas 2020.

Gillian, who works remotely as a part-time counselor at Sozo, a ministry of Bethel Church in Redding, began writing her newly released book, "The Adventures of Deborah and Kite at the Big River" in the spring of 2017. She finished writing the book, which is the first in a series, last year.

"Writing part-time while working and living life, it took me until the summer of the COVID lockdown last year to finish actually writing the story. Then came editing and all the steps to self-publish. I learned a lot about perseverance during this process," she said.

Almost immediately, Gillian knew this would be a three-part series.

"The Adventures book became a 300-page novel and I wrote the ending with the next book in mind," she said.

Gillian answered a few questions about her book and the inspiration behind it.

Q: Have you already begun writing the second book in the series?

A: Yes, the second book is underway! It will feature Tadpole, Deborah's younger brother, and the Ancient Forest. Deborah, Kite and Emeth will be very much part of the story, as well as some new characters like Corvus the raven who lives in the Ancient Forest.

Q: The illustrations are beautiful. How closely did you work with the illustrator to create the art for your story?

A: I loved working with Nicola Hill! She is a very gifted artist. We worked closely together on the project. Nicola had a feel for the characters and a heart to bring them to life in a most endearing way. She was a dream to work with and remains a great friend.

Q: Do you have a target audience?

A: Well, I believe this story appeals to young and old, but I wrote it for children of reading age, between 6 and 12 years old. Big kids are enjoying it, too! I have an 80-year-old friend in the UK who loved the story! He and his wife would read it together in the evenings, he told me.

Q: What was your inspiration for this story? Did any aspects of the story come from your time in Tehachapi?

A: I wanted to write an adventure story that children could enjoy getting lost in, that was wholesome and engaging. Honey bees are super important to us humans for many reasons. They are fascinating creatures. I felt inspired to make the main character, Deborah, a honey bee with a royal calling. Young Deborah is going to be the queen of her colony one day. She's heir to the throne, daughter of Queen Miriam.

Q: Your bio mentions family writers, your dad and great-great-grandfather. When did you start writing yourself?

A: I started writing the book in the spring of 2017 as a fun, part-time project. I had written some poetry before that and had positive feedback but never thought of writing a book until then.

Q: Where did the story come from, with a bee, butterfly and eagle becoming friends?

A: Great question! I was inspired to write the main character as a honey bee as I had been reading about their lives, how honey bees live in community, working constantly for the good of the whole colony. Bees are a wonder of nature; they pollinate our food crops, working hard to produce honey for the winter months. I included some fun facts about honey bees in the back of the book so that children can learn more about these amazing creatures. The story unfolded as I wrote it, with Emeth the butterfly and Kite the young, fledgling eagle emerging in my imagination as Deborah began her adventure at the Big River. It was a lot of fun to write!

Q: The bee, butterfly and eagle have human qualities (speech) but kept their natural qualities, as well. Was that hard to accomplish?

A: No, not really. My imagination was the birthplace of who the characters are and how they relate to each other. I read about bald eagles, for example, how they are around 5 years old when they receive the white feathers on their heads. I read about butterflies and their life cycle, too, because I wanted the reader to picture them as they are in the wild. I wanted to inspire children to imagine what they would look like without over-describing every character and every scene. My hope is that children can picture each scene in their own imaginations.

Q: Is the setting in the story a real place you've been or did you create it?

A: Bluebell Meadows was inspired by my childhood memories in England of fields full of beautiful bluebells in the springtime. I love bluebells! The Big River is pure imagination; a place where bald eagles raise their young and catch fish in a broad river full of life, where sunflowers grow at the edge of the water. A place of great, unspoiled, natural beauty.

Q: Have you been published previously?

A: No. I self-published this book and would love to find a publisher for the second and third books. Self-publishing was a steep learning curve!

Q: Where do Deborah, Emeth and Kite go next? 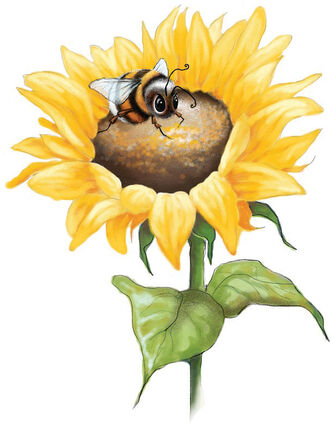 A: Ah, good question. I can tell you that Deborah's brother Tadpole will feature in the second book as he goes on a journey to the Ancient Forest to find adventure for himself. Tadpole is a bit older now and his sister, Deborah, is busy as the singing tutor for the young bees, as well as taking princess lessons. She will become queen one day, but what about Tadpole's future? He wants to prove himself and come out from under his sister's shadow. The story will be one of action, as Tadpole faces dangers of a different kind, and will inevitably need the help of his friends and his family to get him out of trouble.

You can buy "The Adventures of Deborah and Kite at the Big River" (signed copies, too!) on Gillian's Etsy shop, GoldenFlowerBooks. The book is also available to order at bookstores like Barnes & Noble and online. The eBook, the audio version, which is read by Gillian, will be available later this summer. Learn more about Gillian on her website, gillianblackah-kingsley.com.

Join local author Gary Perlin for a signing of his books “The Dark of the Grey: Omnibus” and its companion novel “The Odyssey of Kentucky Ken.”

When: July 24, from opening to closing time, or whenever books run out

• The signed copy of “The Dark of The Grey: Omnibus” will sell for $20. If the reader buys both books together they save $5 and will get both for $25. “The Odyssey of Kentucky Ken” costs $10 signed when bought alone.