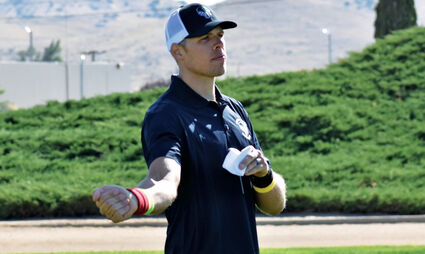 Kris Krempien becomes the 20th head coach in the 90-season history of Tehachapi High School Football. He served as the offensive coordinator in 2019 prior to having the 2020 season cancelled due to COVID-19.

As previously speculated, Kris Krempien was recently named head coach of the Tehachapi Warriors football program, taking over for departing Doug DeGeer after three seasons and a COVID-cancellation.

Krempien came to Tehachapi over three years ago after a successful stint as head coach of Rosamond High School, a journey that included a CIF Southern Section finals appearance. As fate would have it, he came to Tehachapi searching for a chance to be an assistant coach, which he was for one season; and now this latest opportunity to be the head of a program has him back calling the shots. He becomes the 20th head coach in the 90 seasons of Tehachapi football.

There is no doubt some rebuilding is in his future, the harsh reality is that since Tehachapi did not play football at all in 2020, there is a large gap in valuable experience. According to Coach Krempien three of his current 30 or so varsity level players have ever played in a varsity football game; two of those played outside of Tehachapi, only one has never experienced Friday night Mountain Football. Not since the start of the program in 1930 has there been a calendar year before without Tehachapi High School football. This actually compares greatly to 1930 considering of the 14 boys that turned out for that first team, only one had ever played the game of football before. 2021 is almost like starting all over again.

I guess it is fitting that Coach Krempien has opted for the word "RESET" to be put on the backs of the official team shirts, now available for the 2021 season. Because we are in fact resetting THS football, it will be 22 months between whistles when they open the 2021 season against Golden West in Tehachapi ... 22 months that held a ton of change, lost a ton of promise and forced a reset on the program.

Tempered expectations are also the name of the game from the fan perspective. Due to a lack of experience and prohibition of organized team activities and workouts until about a month ago, it is going to take some time for this group and this program to get back on the right track. It is part of the reasoning that the Warriors will once again go with a simpler offensive set and game plan that is easier for the team to grasp and is more conducive to a smaller roster size. With an underclassmen-heavy lineup, the real promise comes in the next few seasons with the players, systems, workouts and coaching philosophy are so used to each other that the synergy equals success.

That is not to say this season is void of hope, quite the contrary. Apart from the parochial schools on the schedule (Garces Memorial and Bakersfield Christian), most opponents suffered some sort of challenging 2020 with either very few or no football games whatsoever. Tehachapi's non-existence of a schedule in 2020 certainly puts them at more of a disadvantage but the uniqueness of the last calendar year are still impacting every program across the area. There have been other coaching changes in the South Yosemite League outside of Tehachapi and every program has some sort of pandemic-related baggage they will try to overcome when the games start next month. When that time comes, we all know that anything can happen.

It is time to get on board for another season, we have waited 22 months and a lot has changed, including the head coach, but there is promise on the horizon, hope for the future and a good group of coaches set to lead this "RESET" of Tehachapi High School Football.