Emery Hubbard: World War II Veteran of the Battle of the Bulge 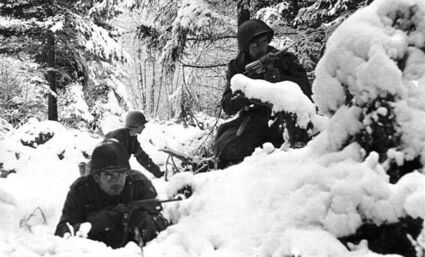 (Note: This is the 17th article in a continuing series about local military veterans and their service to our great country. It is also the second article focusing on World War II. Like Bill Jasper and Henry Martinez [February 13, 2021 issue of The Loop], Mr. Hubbard took part in stopping the massive last-ditch German offensive on the Western Front that began in December 1944, and which is commonly known to Americans as the Battle of the Bulge.)

Emery Hubbard was inducted into the military on December 9, 1943. Following basic training, he was assigned as a cannoneer to an anti-tank (AT) company in the 75th Infantry Division (75 ID) at Camp Breckinridge, Kentucky. His division shipped out from the New York Port of Embarkation in mid-November 1944, arriving in England eight days later. After some additional training, the division landed in France on December 13, 1944.

Three days later, on December 16, Adolf Hitler launched a powerful, surprise offensive through the snow-covered, densely forested Ardennes region between Belgium and Luxembourg in a final, desperate bid to turn the tide against his British and American adversaries. To help stem the German advance, Hubbard's 75th Infantry Division was rushed to the front and engaged in tenacious defensive combat.

On the cold Christmas night of December 25, 1944, 20-year-old Private First Class Hubbard was on sentry duty when German forces advanced toward his company, setting up a machine gun (MG) in a nearby house. Hubbard, who had acquired a Thompson submachine gun from a motorcycle messenger, volunteered along with a five other men to conduct an assault on the German MG post. But the assault failed, with four of the men being killed. Undaunted, Hubbard and the other survivor (a sergeant) returned with an AT gun and knocked out the German MG nest.

Following the Allied victory in the Battle of the Bulge, the 75 ID was soon battling its way into Germany. In mid-April 1945, with the war approaching its end, the division was pulled out of the line for rest and rehabilitation. It was then assigned security and military government duties in Westphalia, a region in northwestern Germany.

Hubbard, who returned to the United States as a master sergeant, was discharged from the military in March 1946. His impressive collection of combat medals included the Bronze Star, Combat Infantry Badge, European Theater of Operations (ETO) medal with three battle stars and the German Occupational Medal.

In the years that followed he completed his education, graduating from both Bakersfield College and Brigham Young University. He also attended the National University of Mexico and became fluent in Spanish. He eventually went to work for the Kern County Sheriff's Department as a deputy sheriff and sergeant; he spent the last 20 years of his professional life working for the Welfare Department as an investigator.

On March 24, 1967, Hubbard had married his second wife, Alice. A marriage that brought forth two children; both Emery and Alice also had a child with their first spouses. As Alice recalled, her husband rarely talked about his war experiences, however, "he always told a couple of stories," she said. "On one occasion, Emery was in a foxhole; he and the others were under artillery fire. A couple of soldiers jumped in his foxhole because they felt safe with him. He was a trusted soldier and a very religious man. Another time, a superior officer, who was in a jeep, said he was driving out to the front to see where his men were. So, Emery jumped in front of the jeep and said, 'No, no, Sir! You don't want to go out there!' But the officer said, 'Get out of my way, soldier, I'm going through!' Well, the officer didn't make it back. Those were the only two things he ever really talked about."

When her husband turned 60, Alice sent him on vacation to all the spots where he had served in Europe during the war. Later, they traveled together to Europe and visited the battlefields of the Battle of the Bulge. They also began to regularly attend the meetings of WWII veterans organizations, on several occasions accompanied by Bill Jasper; as a result, Hubbard began to open up somewhat more about his wartime experiences. In May 2004, the couple visited the National World War II Memorial in Washington D.C. shortly after it had opened. The memorial is dedicated to the 16 million who served in our armed forces during WWII and the 406,000 who perished protecting our freedoms.

Emery M. Hubbard passed away peacefully in Tehachapi on March 24, 2017. It was their wedding anniversary, they had been married for exactly 50 years.

When I asked Alice what she remembered most about her husband, she didn't hesitate, "Emery loved people. He was very gentle, quiet. He loved his children and grandchildren. And he loved the Boy Scouts of America. He was a scout master for many years and made sure our two boys attended the scouting jamborees on the East Coast. I might add that Emery was also quite adventuresome; for his 65th birthday he went sky diving!"

It should also be pointed out that, in his later years, he was active with the Tehachapi SENIOR CENTER and was dedicated to serving the Church of Jesus Christ of Latter-day Saints.

Emery, thank you so much for your wonderful service to our country. You are sorely missed. We need more men like you in our world.