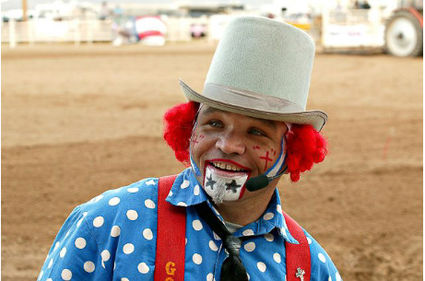 Nate was born in Colorado in 1978. He moved to Arizona when he was 5 and has called it home since.

He started in rodeo when he was 17 in the AJRA, then moved to High School Rodeo and amateur bull riding. In 1997 he went to a bull fighting school and it changed his life. He became a bull fighter, fighting bulls all over the Southwest for 13 years. In 2001 he met and married the love of his life, Tabie. She was running barrels at a rodeo where he was fighting bulls, it was love at first sight. In 2003 they had a daughter Tarah; a true cowgirl and rodeo star.

In 2009 he was involved in a bull fighting accident. Nate almost lost his left leg due to the injuries sustained, but six surgeries later the doctors were able to save his leg. He was sidelined from rodeo for about nine months; this is when he decided to put on a microphone and start packing a barrel to set out on his next venture. Rodeo has given Nate so much in his life and he was not ready to be done.

In 2011 he worked his first PBR Touring Pro Event. Then in 2012 he was able to work his first year in the PRCA as a permit card holder. In 2013 he was blessed to be working in the PRCA as an official Barrel Man/Clown card holder. Now he travels all over the United States entertaining audiences everywhere, putting smiles on their faces. Nate feels truly blessed in being able to share his dream and excitement of rodeo with thousands of people, as he travels up and down the highway.

Nate was diagnosed with Type 1 diabetes when he was a 18 months old. He has lived his whole life being told "you can't do this" and "you can't do that" because of his illness. Taking shots and pricking his fingers was just a way of life; he never knew anything different. He looked at every doctor that told him "you can't" or "you won't be able to" as if it was a challenge. So, in his travels from rodeo to rodeo, he has met so many others with diabetes. Mainly younger adults or kids.

Nate truly believes God puts you in situations and guides you in your purpose. If he can help one of these young diabetics with adapting and coping with their diabetes by helping them see they can live a normal, active, productive life, he feels it was a success. Diabetes won't stop you if you don't let it. He is now in his 30s, lives a very active lifestyle, a lifelong habit and continues to prove others wrong. As he always says, "Let the good times roll!"