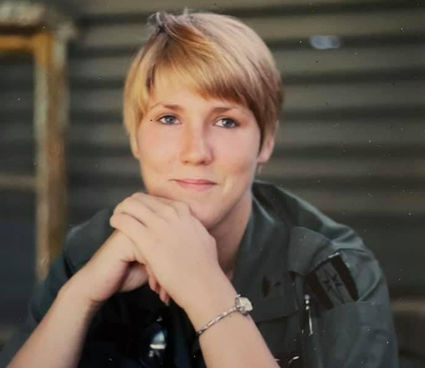 This is the 16th article in a continuing series about local military veterans and their service to our great country.

Diane was born in Lancaster, Pennsylvania, on Dec. 12, 1943. When she was very young she moved with her parents to Wilmington, Delaware. Her father, an electrician, made a career with Delaware Power & Light, while her mother was a stay-at-home mom. When Diane was just 10 years old tragedy struck when her father died suddenly.

"It was a tough time," she recalled, "and mom had to go to work. She worked in a pharmacy."

After her mother remarried, the family moved to Newark, Delaware. Diane attended John Dickinson High School in Wilmington (just a "hop, skip and a jump" from Newark), and was drawn to the fields of science and nursing. "I wanted to become a nurse. I always wanted to help people. When I was a little girl I put Band Aids on everything!"

After graduating from high school in 1961, Diane matriculated to Delaware Hospital School of Nursing (also in Wilmington). "It wasn't like nursing school today. We had house mothers. We had to be in our rooms by 10 p.m., with lights out by 10:30 p.m. It was very strict. If we wanted to study past 10:30, we'd hide in our closets and shove a towel in the bottom of the door so the light didn't show." She completed her nursing studies in 1964 and was employed by Delaware Hospital as a nurse for several years.

In 1965, Diane made the decision to join the National Guard in Delaware. "I was doing it for the money," she said, "that's an honest answer." In an unusual move, the Guard detailed her to Fort Sam Houston in San Antonio, Texas, for six weeks of basic training; to this day, she has no idea why the Guard sent her to basic (typical Guard service was simply two weekends a month, then an extended two-week period of service at some point in a given year). Yet the opportunity to experience basic training was very much to Diane's benefit. "There was so much to learn. How the military did things. During basic, they'd shoot the goats that were out in the fields, then we'd learn how to remove the bullets and stitch them up." When she returned from San Antonio, she was able to teach the two other nurses in her Guard unit what she had learned.

Meanwhile, the Vietnam War was heating up, and Diane's experiences at basic training had aroused her interest in adventure and traveling. So, Diane joined the Army. As noted, she had always wanted to help people, now she wanted to go to Vietnam to do just that. As she put it, "I thought I could really help there."

A young woman in her early twenties, Diane flew from Travis Air Force Base, California, to Vietnam in August 1967. The great adventure had indeed begun, even if at first it made her question her sanity! "When I got off the transport in Saigon, they put us on buses that looked like prison buses. We were escorted by jeeps mounted with 50-caliber heavy machine guns." Struggling to grasp the reality of what she was experiencing, she recalls saying to herself, "What is a nice girl like me doing in a place like this?!"

Diane was assigned to the 2nd Surgical Hospital in Chulai. Like most nurses in Vietnam, she worked 12-hours shifts and, when overwhelmed by large numbers of wounded coming in from the field, she and other nurses worked around the clock until the crisis was overcome. Diane worked mostly at night, "That's when we got patients who had been stabilized ready for transport to Ramstein, Germany, for long-term care. Over 90 percent of our patients [at Chulai] survived their wounds. However, at Chulai we had no assigned neurosurgeon, so we had to wait arrival of the Navy hospital ship that would provide us with a neurosurgeon. As a result, most of the wounded who required a neurosurgeon didn't make it."

Among her many experiences while in Chulai, two came quickly to mind. "We had a patient come in who had been shot in the buttocks. He was a sergeant. He had a wife and two kids at home. He was bleeding profusely. We couldn't stop the bleeding. He looked up at me and said, 'Am I going to be OK.' I said, 'You're going to be just fine.' Two minutes later he was gone. That disturbed me, whether I'd done the right thing. Another patient, whom I adored, had also been shot in the buttocks; he survived and I helped him, when he was unable to do so himself, by writing letters for him to his girlfriend back home."

After some four months in Chulai, Diane was transferred to a military hospital in An Khe, where she worked from late 1967 to the spring of 1968. She then moved on to a new military hospital in Da Nang, where, how shall I put it, she made quite an impression one day on General William Westmoreland, the commander of U.S. forces in Vietnam from 1964 to 1968. General Westmoreland was in Da Nang, visiting troops, wounded soldiers and nurses there. As Diane explained, when the "brass" came through, "making the rounds," passing out Purple Hearts, medals, etc., all personnel were simply to continue with their normal duties. Diane was standing on a crate, reaching for an item on a shelf. She suddenly turned around and saw the general standing two feet away from her. Looking up at her on the crate, he quipped, "You certainly are a tall nurse!" Without a moment's hesitation, Diane shot back, "You certainly are a small general!"

Diane, of course, was shocked by her "impudence," though, of course, her response wasn't meant to be mean-spirited in any way. "If only I could have taken back those words. I was so embarrassed. I wanted to crawl through the floorboards!" Yet, no worries, for the good general took no offense and simply laughed it off, much to Diane's relief. "No one at the time, however, thought it was funny, except for the general. I think if he hadn't laughed it off I'd still be in Fort Leonard Wood with a ball and chain around my ankle!"

In late August 1968, Diane returned to the United States and was again assigned to Fort Sam Houston in Texas. In August 1969, she was mustered out of the Army and moved to Madera, California, working for less than a year at Dearborn General Hospital there. This was followed by a move to a hospital in Las Vegas, Nevada, where she was assigned to an operating room. After five or six years in Las Vegas, she returned to California. In 1980, she married her husband, a marriage that would bring forth three children. In 2014, Diane retired from the nursing profession.

A few years earlier (about 2010), Diane received a telephone call "out of the blue" from the television series, Mail Call, hosted by R. Lee Ermey, a retired U.S. Marine Corps staff sergeant and honorary gunnery sergeant. During each episode (the show debuted in 2002), Ermey, among other things, read and responded to questions submitted by viewers concerning weapons, military equipment, customs, and terminology used by the U.S. military. More to the point, Diane was asked to come on the show and speak about the experiences of nurses in Vietnam, which she readily did. Yet, to this day she has no idea how they got hold of her.

At the end of our interview, reflecting on her year of service in Vietnam, Diane said, "Basically there were such highs and such lows, but it was the best nursing I ever did. We saved a lot of lives. It was the best and the worst, year of my life." While in Vietnam, and in the decades of civilian life that followed, Diane, unlike many Vietnam nurses, did not suffer from PTSD. As she explained it, "I have a really good sense of humor. So I was [more resilient]. It wasn't until some five or six years ago, after bottling it all up inside for so long, that I began to have some of my own issues." Fortunately for Diane, she sought help and received it from the veterans Administration. "I got some counseling. And that was very helpful."

To conclude my interview with this delightful lady, I should note that Diane remains a proud, patriotic American, who is not shy about defending her country, our troops, and, most importantly, the memories of the wounded (and dying) young men to whom she was so fully committed as a veritable "Angel of Mercy." Diane brought this home "in spades" with this anecdote, "I was in a quilting group a few years back with several other women, about ten. One of the ladies, who had never served in Vietnam, but thought she knew everything about that war, well, she just went on and on, often disrespecting our troops with her comments. Eventually, I couldn't tolerate her ignorance any longer. So, I stood up and I said, 'You've never been to Vietnam and you're just full of ****.' She shut up. I loved the boys I helped over there."