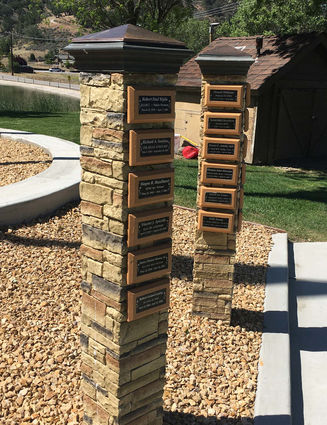 On Memorial Day a service took place at the Cub Lake Veteran's Memorial in Bear Valley Springs. Ben Chavez, US Army Vet, gave the introduction and then called for the Pledge of Allegiance. The National Anthem was beautifully rendered by Tamara Solange.

Martin Hernandez, the BVSVA Commander, spoke and asked, "Are we worthy of the sacrifices these servicemen gave?"

Many Honorees were remembered this day. Each has a plaque on the pillars at Cub Lake Memorial and the widow of each member was called up to be presented a rose. Each Honoree has been a resident of Bear Valley Springs.

The Honorees are as follows:

Also, special note was given in the program to our Gold Star parents, Donna and Rick Zanutto, on the loss of their son, Cpl Adam Zanutto who served in the USMC.

James Carmichael, US Navy Vet and renown bagpiper, with Travis Combs and Ken Haas played Amazing Grace. After a Rifle Salute by the BVSVA Honor Guard and Taps by Richard Oldenburg, the service came to an end.