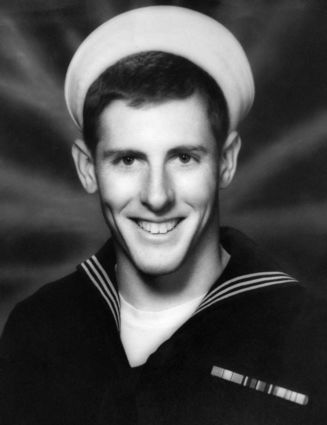 This is the 15th article in a continuing series about local military veterans and their service to our great country.

Ron was born in Wichita, Kansas, on Sept. 6, 1947. His father, just out of the service – he had fought with the Army in the Pacific Theater, at one time becoming trapped behind Japanese lines for six months until being rescued – was going to school in Wichita for the Boeing Aircraft Company, for which he would work as a machinist for several years.

As a young boy, Ron moved back and forth between Wichita and the little town of Norwood, Missouri, where his family owned a dairy farm. Ron's mother was a "farmer's wife." She stood about 4' 9" tall, but was a tough little cookie.

"She was my rock. I could always depend on her. She was always reading her Bible; believed in the Lord same as I do now," he recalled fondly.

Between the ages of 7 and 12, Ron received quite an introduction to hard work on the family farm. His day began at 3:30 a.m. His many responsibilities included milking cows (lots of them!), feeding hogs and driving a tractor.

"I was strong as a bull ox! When I was just 9 years old, I was lifting 75-pound bales of hay. I had to walk a mile to get the bus to school," he said.

In the late 1950s, the Rich family pulled up stakes and moved to Bakersfield, where Mr. Rich had taken a job with Hopper's Machine Shop, making casings for the military's nuclear bombs through the early 1960s. In Bakersfield, Rich attended East Bakersfield High School for a short time, then transferred to North High School. In high school, Ron competed in track and cross-country, while also taking part in the men's choir. "I had a hard time catching up [academically] in school," he said. "Because the education levels in Missouri and California were quite different. But I was into English, and really loved literature."

In his senior year at North High, Ron joined the Navy Reserves and, in 1964, went to boot camp in San Diego during his Christmas vacation. He graduated from high school in 1965. Two months later, he was on a ship, heading for Vietnam.

"I was on the transport USS Okanogan, and we were bringing some 1,200 Marines and all their gear and supplies to Vietnam. It was a quick trip and we were soon back in the States," he said.

Not long thereafter, Ron learned that the Navy was seeking volunteers – for what, he wasn't quite sure, but he elected to volunteer anyway. After 30-days leave, he reported to the big Naval base at Mare Island (close to Vallejo, California). Here he found out that the Navy was developing a new tactical concept – that of the Mobile Riverine Force (MRF), which became one of the few "joint" units of the Vietnam War, and in which Army infantry, artillery and other commands would work closely with small Navy riverine craft to help thwart Communist aggression.

As a result, Ron was assigned to a heavily modified World War II landing craft, now outfitted with weapons and reinforced with armor plating to enhance survivability. His vessel, for which Ron served as the starboard 50-caliber machine gunner, was part of MRF's Task Force 117 (TF 117). Specifically, the riverine craft of the task force were to cooperate with the Army's 9th Infantry Division – patrolling inland waterways, transporting the Army units to combat zones, and supporting them with weapons that, in addition to heavy machine guns and anti-aircraft guns (for use against ground targets), included flamethrowers ("we called them 'Zippo,' like the cigarette lighter") and giant water pumps to flood enemy bunkers on the banks of rivers.

However, before his unit (Task Force 117, Division 111) was dispatched to Vietnam, it trained on the sloughs near Travis AFB, California, to prepare for the waterways of Vietnam. "We named our boat the 'Swamp Fox,' after the Disney movie," Ron said. "We were the birth of the maritime expeditionary security forces."

In February 1967, Ron's unit arrived at Dong Tam Naval base, Vietnam. In the months that followed, he would participate in dozens of missions along the circuitous, jungle-like and often lethal waterways of the Mekong Delta. One of the "worst missions" took place in April 1967 – the "Battle of Snoopie's Nose" (so called due to the unusual shape of the river, a small tributary of the Song River).

"We got caught in terrible enemy fire. We lost some guys, lost some boats. I lost two of my best friends. But we accomplished our mission and destroyed the enemy," he said.

Yet the costly mission of April 1967 was hardly unique for Ron and his mobile riverine warriors. As he put it, "We got into some really nasty stuff. In many operations TF 117 suffered serious losses in boats and crews. In some operations we really got 'wacked.' But we posed a serious problem for the enemy. We cut off his waterways, cleaned up the villages, cut off his movements. We'd track them, drop off the 9th Division infantry, who would make a big sweep and take out the enemy. We'd cut 'em off at the water."

Ron's deployment with Task Force 117 ended in December 1967. But the task force continued its operations in Vietnam for several more years, despite an extremely high casualty rate; in fact, 3,000 men of TF 117 (both Navy sailors and soldiers of the 9th Infantry Division) never returned home. The task force's terrible sacrifice, its impressive record of courage and perseverance, is reflected in the fact that it had more Medal of Honor recipients (11) than any other formation (Army, Navy, Air Force, Marines) in the Vietnam War. As for Ron, he was only wounded once. "It was just a scratch, so I didn't put in for a Purple Heart." For his service in the task force he garnered the Navy's Meritorious Achievement Medal with a Combat "V" for Valor, the Combat Action Ribbon and the Navy Reserve Meritorious Achievement Medal with a Combat "V" for Valor. (Note: Ron was on active duty in the Navy Reserves during this time.)

Returning to civilian life in 1968 (Ron remained in the Navy Reserve, but had completed his two-year service commitment), he found it difficult to readjust. "They didn't want me. I was rejected big time. I was a Vietnam veteran. I was a 'baby killer.'" By 1972, Ron had a serious decision to make – either "re-up" in the reserves, join the regular Navy or leave the military altogether. Because of his ongoing estrangement from the civilian world, and because "the Navy was where I felt safe," he decided to enlist in the regular Navy.

In the years that followed, the American withdrawal from Vietnam was underway and, by early 1975, was coming to a sad, confusing and chaotic end. In April 1975, Ron was again back in Vietnam, this time taking part in Operation Eagle Pull – an effort to exfiltrate American personnel from the U.S. Embassy in Saigon and to save Vietnamese refugees terrified of being left behind and at the mercy of Viet Cong or regular North Vietnamese forces. "It was a scary time," Ron remembered. "Refugees were hanging off the tops of ships; I don't know how these ships even stayed afloat. These people were desperate to get out." Ron and his boat crew helped to rescue hundreds of refugees from certain death had they been left behind. "God put me there for a purpose. I saw all sides of humanity. I saw desperation like I'd never seen before."

When Ron returned to the States, "PTSD finally caught up with me. I finally cracked." Following an incident involving Ron and a young and inexperienced senior officer, he was sent to a Navy hospital for psychiatric care. He remained at the hospital for two months, fortunately the care he received there was helpful to him. Yet to this day, as Ron forthrightly admits, he still struggles from time to time with PTSD.

Ron left the Navy in the late 1970s, having attained the rank of Petty Officer, Second Class. In the decades that ensued, he worked many different jobs, including as an environmental systems technician with the FAA in Bakersfield, and eventually retiring in the late 1980s from his position as an assistant scientist in a biology laboratory for Kent Sea Farms, a contractor employed by the Diablo nuclear power plant (San Luis Obispo County).

Yet as our interview neared its end, Ron intimated that he had not only left Vietnam with serious PTSD issues, but that he had also suffered grievous exposure to the chemical defoliant Agent Orange. "They'd come through and spray down the [Mekong] delta and a week later there wouldn't be a leaf left!" In fact, he was first diagnosed with problems most likely attributable to Agent Orange while still in the Navy – "basal cells, they would show up as little red sores and then they'd get bigger [many years later]; they finally got into my jaw and attacked my jaw bone. Still, the government won't recognize it as having to do with Agent Orange." 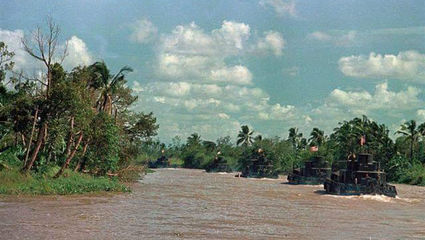 In 2013, Ron lost a lung. He is now on 100 percent disability from PTSD and other health issues most likely related to Agent Orange. Yet despite his trials, he remains optimistic and has not lost his sense of humor: "I'm OK. I'm alive but I don't have any teeth because I don't have a jawbone, so I can't bite anybody. But I'm still pretty cute!"

Giving him added strength and purpose is his wife, Glenda, whom he married in 2015 (Ron had three male children from two previous marriages). "She's been my rock and my support. She and the Lord are what keep me going," he said.