Warmer weather and the return of rattlesnakes 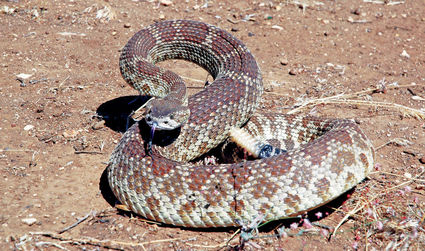 Last year at about this time Claudia White, the publisher of The Loop newspaper, asked me to write my column about rattlesnakes. Now that warmer weather has come back and reptiles have begun to stir, she thought it would be appropriate to revisit the topic.

The Tehachapi Mountains are primarily home to one species of rattlesnake: the Northern Pacific rattlesnake (Crotalus oreganus oreganus). This snake typically has a basic "ground color" that matches their surroundings, and may be light brown, tan, olive-green, reddish, gray or golden. Over this basic background color, they have saddle blotches or dark patches running the length of their body. These blotches tend to be very dark right at the margins, then have light borders around them. Their tails are banded with alternating light and dark bands, with the dark bands typically wider than the light bands.

Now, within this basic appearance, there are tremendous variations. Northern Pacifics can be very pale, very dark, reddish, greenish, intensely patterned, lightly patterned, etc. If you looked at photos of some different individual specimens, you would be skeptical that they were from the same species at all. And yet they are.

Residents of Cameron Canyon have reported Northern Mohave rattlesnakes on their property and wind energy employees occasionally encounter them at turbine sites on the eastern hills, but otherwise there is no evidence of any other rattlesnakes in the Tehachapi Mountains but Northern Pacifics.

Rattlesnakes spend the colder months in a refuge known as a hibernaculum, which is Latin for tent for winter quarters. Usually this is in a crevasse or cavity in a boulder pile, though rattlesnakes may also use a fallen tree trunk or abandoned animal burrow – rattlesnakes are poor diggers and don't excavate their own holes. Which is why I always smile when I hear someone refer to a random gopher or ground squirrel burrow as a "snake hole," as though a rattlesnake made it.

Rattlesnakes often congregate in a hibernaculum, and research into some rattlesnake species has revealed that those rattlers overwintering together are mostly genetically related to each other. There hasn't been enough research to reach the same conclusion with Northern Pacifics, but it is certainly plausible. A single location housing a dozen or more rattlesnakes coiled up together is the stuff of some people's nightmares, but the snakes are simply sharing the safety and potential warmth of a proven hibernaculum.

The period of cold weather dormancy among snakes, lizards and tortoises is called brumation, from the Latin word bruma, meaning midwinter or winter solstice. While it is common to hear people talk about snakes hibernating, technically only mammals, which of course are warm-blooded, enter into hibernation.

Cold-blooded creatures like reptiles, known as ectotherms, also enter a state of torpor to avoid low temperatures, but it is known as brumation. It is less rigid than hibernation by mammals – during an early warm spell, lizards and snakes may move around or emerge from their hiding place, only to return and brumate for more weeks if the weather gets cold or even snowy again. Mammals typically do not re-enter hibernation.

Brumation is not without risks to reptiles – it is a little akin to being in a coma, with accompanying hazards. Reptiles that enter brumation with injuries, for example, have a hard time healing because their metabolism is so low, and every year some reptiles who enter brumation don't survive the process.

When the weather warms up, snakes emerge to bask and hunt for prey. They may not go very far, however. Studies have shown that if food sources like lizards and small rodents are available, rattlesnakes may only venture within several hundred yards of their hibernaculum. Snakes in less productive areas may have to travel up to several miles for food.

The re-emergence of snakes is no reason to panic, but there is also good cause to be careful – we do have rattlesnakes, and their venom is dangerous to humans and pets. Fatalities are exceedingly rare – of the estimated 7,000 to 8,000 bites by venomous snakes each year in the U.S., fewer than five result in death. Most fatalities occur east of the Rockies. An estimated 25 percent of rattlesnake strikes are what is referred to as a dry bite – it is a defensive strike and no venom is injected.

And contrary to urban myth, baby rattlesnakes are not more dangerous because they "haven't learned to control the amount of venom they inject and will give you a bigger dose." This odd bit of nature lore gets repeated constantly, and there is zero evidence of it. Larger rattlesnakes have considerably more venom, and are likely to inject more it. Best advice: don't get bitten by any rattler, large or small. 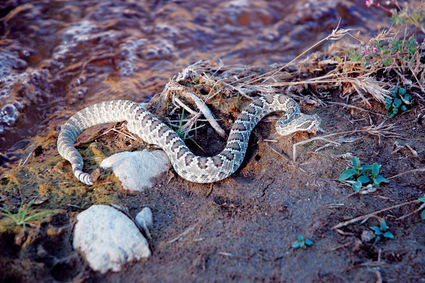 On the Mojave Desert floor, and the foothills and canyons that rise up from the desert, you can encounter the Northern Mohave rattlesnake, often referred to as a Mojave green, though they are not necessarily greenish in color.

There is a group of volunteers in Bear Valley Springs known as the Snake Guys that have been active for about 15 years now, and they respond to calls for help and remove snakes. They pick up both rattlesnakes and non-venomous ones, like gopher snakes, and take them to remote areas in an effort to protect both humans and the snakes. They have already removed about 30 snakes this year. You can call or text Ron Hayton at (661) 203-4468 or Chris Budge at (661) 972-4320.

Snakes have lived in the Tehachapi Mountains for many thousands of years. This was their home long before it was ours. With some common sense and appropriate caution, humans and snakes can successfully co-exist.