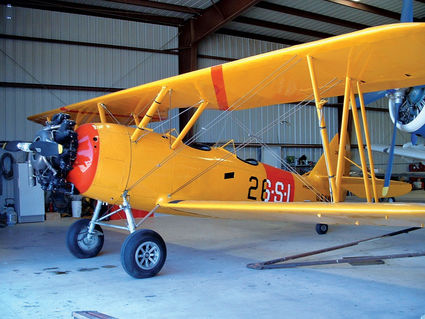 Al Hansen's little N3N-3"Yellow Peril" two-hole, biplane flew away to a new home in Lake Tahoe sixteen years ago, in 2005. The new owner had been building up a project N3N-3 for over three years and saw Al's ad in Trade-A-Plane and decided he wanted something he could fly immediately and not later. He was impressed with the low-time engine and prop and quality restoration workmanship that had been accomplished by the Yank's Air Museum at Chino. This guy was a true "victim of passion," as my husband, Al, likes to call himself.

As Ron Sheardown, taxied out to runway 08, Al and his son, Dor, held the wingtips. We were all concerned with the winds and turbulence that day, but after Ron was airborne and passed California City, everything smoothed out and the rest of the flight was A-okay.

Arctic Pilot Ron Sheardown, earned his pilot's license at the age of 19 and has amassed over 20,000 hours as pilot in command, with over 10,000 hours in Polar Regions of the world. Ron is known for several arctic rescues, discovering numerous mining claims with six mines in production today and leading or participating in various arctic explorations, including the search for the 1937 lost Russian airplane, an N209, piloted by Captain Levanevski. Ron is the recipient of many national and international awards, including the prestigious Collier Trophy.

The N3N-3 was developed in 1934, and constructed by the Naval Aircraft Company, the government's first aircraft factory, at Naval Air Station in Lakehurst, Pennsylvania from 1936 to 1942. It was similar to its successor, the Boeing/Stearman N2S Kaydet, and it is difficult to tell the difference, unless they are parked next to each other.

The N3N has a more rounded and taller vertical fin and rudder and has only one strut connecting the vertical fin to the horizontal stabilizer, where the N2S or Stearman has two flying wires.

Where the Stearman had wood-frame wings and a welded steel tube fuselage, the N3N had metal-frame wings and used bolted and riveted aluminum for the fuselage structure. Also, the N3N used the old-fashioned weight-saving measure of having the upper wing, which made it easy to remove a single panel for a wingtip repair instead of having to re-rig the whole wing assembly. On the other hand, the N3N simplified maintenance by having quick-remove panels the full length of the left side of the fuselage.

Many more Stearmans were built than N3Ns; 8,584 Stearmans compared to only 988 N3Ns and the present day ratio is approximately 2,207 to 167, which makes the N3N-3 a relatively rare aircraft. 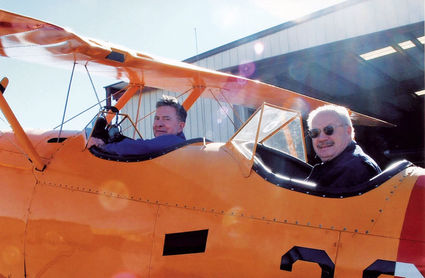 The majority of the N3Ns were declared surplus by the middle of 1945 and were sold to a variety of civilian firms. They were put into service as crop dusters and sprayers because they were able to take abuse and still fly. Roughly 100 N3N-3 seaplanes were maintained by the Navy for active service and were used at Overhaul and Repair, NAS Norfolk, Virginia and at the U.S. Naval Academy, Annapolis, Maryland, to provide aviation familiarization for midshipmen.

There were 35 N3N-3s at Naval Air Facility (NAF) Annapolis in the early 1950s. These aircraft, the last open cockpit biplanes used by the U.S. military, remained in service until being retired in 1961.

It was fun taking pictures of Al as he flew over the house. I liked the one with Soledad Mountain in the background. The engine is so quiet, with its ka-putta, ka-putta, ka-putta, sound that it was difficult to frame each picture, as it flew by.