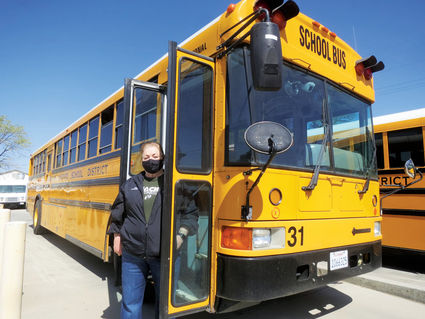 Kathleen Hart stands by bus No. 31, which she drove from 2006 until her retirement in 2019. The bus will be scrapped and replaced by a newer model that meets lower emission standards.

Tehachapi Unified School District (TUSD) will retire 21-year-old bus No. 31 after 550,000 miles of service to take advantage of a grant from the Eastern Kern Air Pollution Control District that will pay most of the cost for a new lower emitting bus.

Bus No. 31, kept in immaculate condition by the district maintenance crew, will be crushed and scrapped. It came into service along with five other International buses in the year 2000. It has 51,885 miles on a newer engine.

"We get very protective of our buses," said 16-year driver Jodie Bellflower.

Hart's routes were on both sides of Bear Valley Springs. The only mechanical problem she had was when a heater hose broke on SR 202. "The mechanic came right out and fixed it," she said. "We were on our way in 20 minutes."

The bus retirement is part of a regular rotation that sees the replacement of one bus a year – made easier now with air pollution grants.

It takes six to eight months to get delivery of a new bus, which is specially engineered to California standards.

Driver trainer Denise Berry said that all the buses in the group of six delivered in 2000 have recorded mileage in the 400-thousands. 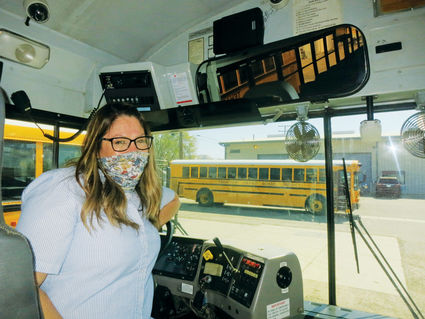 Driver Trainer Denise Berry in No. 31. New bus No. 18, seen through the windshield, is back in the yard after taking its first run that day (April 26).

TUSD has 10 general education bus routes. The district owns its buses and leases vans that provide transportation for Tehachapi students wherever they are in public school, from Bakersfield to Mojave. The buses have taken Tehachapi youngsters on field trips to the Long Beach Aquarium, whale watching at San Pedro, three-day camps at San Luis Obispo, Grad Night at Magic Mountain, Los Angeles museums and school athletic events.

The drivers get attached to their students as well as their buses. "It's almost like you become a mom," Berry said.

"....Mom, counselor, nurse," Bellflower said. "I have teeth in a bag from all the kids who lost a tooth on the bus."

While the school district installed cameras in all buses in 2016, the drivers said they have not encountered serious behavior problems. In the event something happens, Miller reviews the tapes.

Sometimes all it takes to calm things down, Berry said, "is use your mom voice."