After days of waiting for high winds and bad weather to clear on April 29, the colossal six-engine Stratolaunch carrier aircraft, with its enormous wingspan, lifted off gracefully from Runway 30 at Mojave Air & Spaceport ... just as it had done two years ago on April 13.

The composite flying machine climbed effortlessly into the clear blue skies for a three-hour test flight. This gigantic aircraft is nicknamed Roc, as a tribute to the giant bird of Arabian and Persian mythology.

The test flight lasted nearly three hours and at the conclusion, Roc made a couple of low passes down runway 30. Cameras and cell phones were held aloft. The oohs and ahhs were audible, as Roc effortlessly glided through the air. "There she is!" several people exclaimed.

At approximately 10:30 a.m. Roc touched down on runway 30 at Mojave Air & Spaceport with a slight quartering tailwind from the east.

Stratolaunch Systems was originally founded in 2011 by Microsoft co-founder Paul G. Allen. The giant aircraft was built for Stratolaunch Systems by Scaled Composites to carry air-launch-to-orbit rockets. In May 2017, it was rolled out and was engineered to enable deployments of a range of launch vehicle shapes and weights.

Allen passed away in October 2018, and a year later, Cerberus Capital Management acquired Stratolaunch, and they announced they would use the aircraft to provide a high-speed "hypersonic" flight test service. 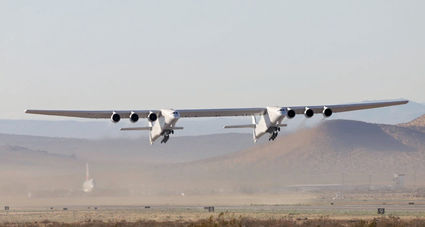 The aircraft features a twin-fuselage design and the longest wingspan ever flown. At 385 feet, it surpasses the Hughes H-4 Hercules(a.k.a. the Spruce Goose) flying boat of 321 feet. The flight crew sits in the right fuselage, and the flight data systems is located in the left fuselage.

This was another history making day at Mojave Air & Spaceport. Perfect weather, perfect flight test and another page in the extraordinary book of aerospace history in Mojave.