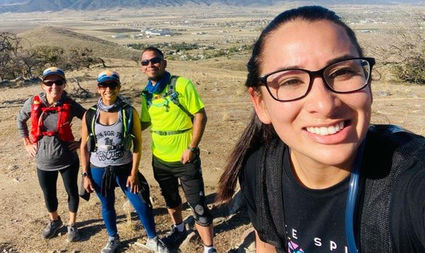 As revealed in a previous article, because Kern County did not move from the purple tier into the red tier until the end of March, the Calgonquin 25k and 50k Trail Races scheduled for April 17 were postponed by the race organizers until 2022.

Although a virtual race option is still available for the month of April, a few stalwart athletes showed up Saturday, April 17 to run the distance, if not the exact course, of both the 25K Calgonquin and the 50K Calgonquin trail runs at the TMTA Lehigh moun tain bike trails. Local elite multi-sport age group competitor Doni Bowersox has trained off and on for the Calgonquin 25K trail run with the local FiP Calgonquin 25K/50K Training Group, which has a presence on Facebook. She ran 15.55 miles, the equivalent of the 25K, on Saturday morning, with one other member of that group, Rebecca Hail, and a husband/wife duo from Hesperia known to Ms. Hail. The group logged 2,474 ft. of vertical climb and accomplished the feat in approximately 3:40 hours of moving time. A few other members of the FiP Calgonquin group ran a truncated version of the 25K trail run, running to the top of the mountain and back down again. Interestingly, Doni's group encountered two sisters from Maryland on the trails running the 50K, who were undaunted by the postponement of the trail runs. According to Doni, the sisters participate in a lot of trail runs and are very fast. They whipped by Doni's little group like the vertical climbs were nothing.

For several weeks prior to the trail run, local chiropractor Dr. Kevin Brown performed regular maintenance chiropractic treatments for Doni, which have alleviated some of the physical ailments from which she has suffered for some time. For the past year or so Doni has continued her cycling, swimming and running all the while suffering nagging discomfort and pain from a neck and shoulder impingement and a Baker's Cyst behind her right knee. On the eve of Doni's run, she reported feeling very good and ready for the big effort. As Dr. Brown says, "The goal of adjustment, however, is to improve nerve function because without proper nerve function the body suffers poor coordination of movement and is prone to injury." He continues, "If you want to run right all the time and be fast in the corners come on down and get your chiropractic adjustment. Better maintenance equals better performance."

Doni was very impressed with the chiropractic care she received, so much so that she is going to continue her maintenance treatment post the unofficial Calgonquin, which only makes absolute sense as "better maintenance equals better performance."