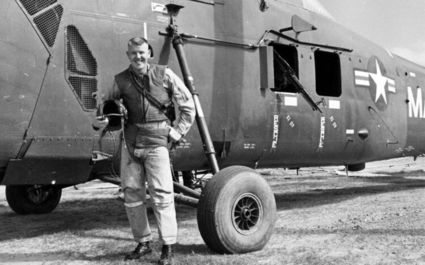 This is the 12th article in a continuing series about local military veterans and their service to our great country. Part I of Sergeant Morris' remarkable story ended in the spring of 1965, with Tom, stationed at Na Trang Air Base as part of the 1st Marine Division, having completed more than half of his one-year tour of Vietnam.

Then came that most horrible and unforgettable day-May 28, 1965. An urgent call came in from a Navy fighter pilot whose plane had been struck by enemy fire. The pilot had ejected and gone down in enemy-held territory. Tom and his search and rescue team immediately boarded their helicopter and dashed off toward the coordinates provided by the pilot. Soon the helicopter was hovering over him.

Tom, in addition to being the crew chief and left-door gunner, was also the hoist operator. He lowered the hoist but the downed pilot was unable to grasp it (the Navy pilot, a lieutenant, had been badly injured ejecting from his plane. In fact, both his shoulders had been crushed and he was completely incapacitated). We'll let Tom take it from here.

"Because he couldn't grab hold of the hoist I had to go down and get him. The crew lowered me down. No sooner was I on the ground than I heard a blast-the entire front rotor was blown off the helicopter and it went straight down. All I heard were screams. It was merciful that all my crew members were killed almost instantly. I was only slightly injured from the blast.

"Then these two Viet Cong came round the corner, lugging a knee-operated mortar, which they had used to take down the helicopter. They were laughing. I shot them both dead with my M-14 rifle. I reached the downed pilot just as it was getting dark. We were very close to a village that was crawling with VC. The villagers were swarming the area, trying to find us; they were armed with knives, spears, and guns. I had to shoot many of them.

"Of course, we had to try and stay hidden from the villagers, so I grabbed the pilot by his collar and kept schlepping him around to new locations. Eventually, I got shot in the head, but I was saved by my helmet, which was sturdier than a typical helmet because it was fitted with some communications gear. The shot, however, grazed my forehead, which bled profusely. At times I could hardly see as my eyes were covered in blood. During the course of the night, I finally got the lieutenant under a pepper tree, and things seemed to be quieting down. By now, I had used up all ammunition for my .357 Magnum service revolver, my M-14 rifle, and the pilot's .45 caliber 1911 pistol.

"Suddenly, I was charged by someone with a sword! He lunged at me, caught me on the side of my flight suit and ribcage, pinning me to a tree. As he struggled to pull his sword out of the tree, I managed despite my loss of blood to reach down and grab my ka bar knife from my leg scabbard. In the flickering moonlight, which enabled me to make out my attacker, I thrust my knife up at him. And that's all I remember."

Tom and the Navy pilot were rescued by an Air Force air rescue unit and immediately transferred to the military hospital at Clark Air Base in the Philippines. Tom had been wounded a ghastly total of 13 times and nearly lost an arm. He spent four months recovering at Clark AB, and then was sent to Hawaii for two more months of rehabilitation. For his almost other-worldly acts of heroism on that "horrible day," Tom received a Purple Heart and the Silver Star.

The Navy pilot, Marc Lender, from a distinguished Jewish family on the east coast (founders of the Lender's Bagels company), recovered and made it home. "So all of sudden," Tom recalled, "I had a Jewish mother! Every Christmas I would get a card from her saying, 'you saved my son!'" Tom and Marc became good friends, and remain so to this very day.

In December 1965, Tom's duty with the Marine Corps came to an end. Back on regular duty with the Air Force, he became an instructor at Edwards Air Force Base, training helicopter gunners. However, he was only on Air Force active duty for about 45 days, and was mustered out of the service in January 1966.

Yet to paraphrase the inimitable Paul Harvey, there's more to Tom's remarkable story. In 1967, he was honored at a ceremony at the Marine Barracks in San Diego. Vice-President Hubert Humphrey personally presented him with the Navy Cross (an upgrade of the original Silver Star) and two artifacts that had been recovered from the battle area-the sword with which he had been stabbed, and his .357 Magnum service revolver. It was only during this unique event that Tom finally learned he had killed 14 of the enemy that day. (Note: Tom's military records concerning the events on May 28, 1965, are sealed until 2041: "Long after I'm gone, many books will be written about President Johnson, Secretary of Defense [Robert] McNamara, and General Alexander Haig. Many people died on missions no one will ever know about.")

Meanwhile, after leaving the military, Tom used his G.I. Bill benefits to go back to school, earning an AA degree in accounting at Orange Coast College, in Costa Mesa, followed by a BA degree from UCLA in 1971, also in accounting. In 1969, Tom tied the knot with Barbara, their marriage bringing forth a girl in 1970 and a boy in 1976.

In the late 1960s and into the mid-1970s, Tom, along with a buddy who was also a Vietnam veteran, started and ran two successful entrepreneurial ventures-a retail outfit in Anaheim that installed eight-track stereo systems in automobiles (based on a business of his father's); and a backpacking store with a total capital investment of just $6,000.

"We sold the best backpacking equipment one could buy, all German or Swiss made. In 1976 we were bought out by a Big-5 sporting-goods store," he said.

Yet Tom's primary "meal ticket" was, as one might suspect, in the accounting field. In 1976, Tom, Barbara and the children, moved to Petaluma in Northern California, where he went to work for the big accounting firm, Price Waterhouse. Several years later (1979), Tom was again back to school, this time securing an MA in accounting from UC Berkeley.

Tom then rejoined Price Waterhouse in Petaluma, but, by the end of 1980, had opened up his own accounting firm in Santa Rosa. The years went by, and Tom built on his a successful career as a CPA. Then, in 1993, his mother suffered a serious stroke. In response, he retired from his firm and moved down to La Quinta (near Palm Springs) to care for her. In 2009, tragedy struck again, with Tom's wife, Barbara, passing away. His mother died shortly thereafter.

Following the death of his mother (2010), Tom decided to go back to work:

"I got bored being retired, so I went to work for the Department of Homeland Security in Port Hueneme, one of the largest deep-water ports on the West Coast. For DHS, we secured ships coming into port for any contraband and drove exotic cars (e.g., Austin Martins, Maseratis and Mercedes) to a staging point on the military base at Port Hueneme. And I'm still doing this. Although now I'm on furlough due to the pandemic. I'm hoping to be back at work soon." 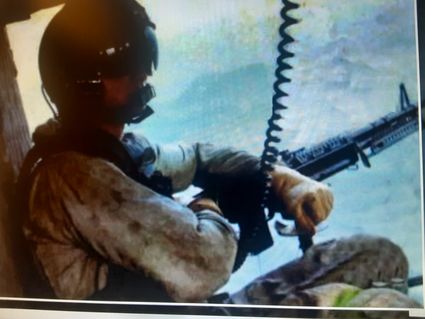 Taking wounded to a field hospital (MASH) at Da Nang. I remember it was a clear day just before monsoon season in April, 1965. New style flight suits with camo.

Sergeant Morris: For more than four decades I, Craig Luther, have interviewed and corresponded with hundreds of veterans from WWII to the recent conflicts in Afghanistan and Iraq; and yet, your description of the events of May 28, 1965 is one of the most harrowing "profiles in courage" I have ever encountered. Tehachapi (and America) salutes you!

Vietnam veteran Tom Morris and historian Craig Luther will be on the Terry Maxwell Show (KNZR, 1560 AM, 97.7 FM), Tuesday, April 27, at 5 p.m. Please join us to hear Tom's harrowing and courageous story. If you miss the broadcast it will be on the KNZR website http://www.knzr.com/shows/terry-maxwell/