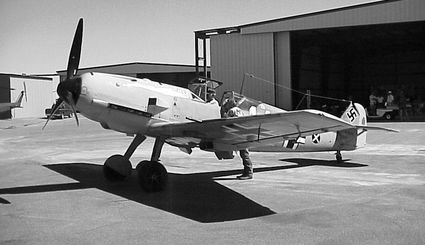 So many historical aircraft have been tucked away in hangars at Mojave Airport through the years.

In 2003, this genuine Messerschmitt Bf 109E, Werke Number 3579 was in Hangar #77 (the same hangar that housed the Voyager Aircraft in the 1980s). The Bf 109 was recovered near St. Petersburg, Russia in 1991 and was fully restored to flying condition, complete with WWII instruments, for the Santa Monica Museum of Flying. The restoration was completed on the Isle of Wight, in the south of England.

The restorers found stampings on parts of the aircraft that verified its identity, along with the Makers Label. They also have wartime documentation from Germany showing that famous pilot, Hans Joachim Marseille, credited with downing 158 Allied aircraft, was flying this aircraft with I Gruppe / Lehrgeschwader 2 when it force landed at Calais-Marck on September 2, 1940, during the Battle of Britain. Although the aircraft was damaged substantially, it was repaired to fly again at the Russian front. It later was shot down over Russia near St. Petersburg and left there for 50 years until its recovery in 1991.

The airplane was shipped to the United States in January 1999 for final assembly at the Museum of Flying and fitted with a restored Daimler-Benz DB601 engine. Bruce Lockwood and Chris Wood worked on meticulously fitting the machine together and readied it for its first flight.

I'll never forget the first time I saw it fly. I was sitting at the computer and heard an aircraft overhead with a sound that resembled a P-51, but wasn't. I ran outside to catch a glimpse of what was making that powerful sound and couldn't recognize the silhouette. I quickly turned on my handheld radio just as I heard the pilot say, "Mojave Tower, Messerschmitt 81562, four miles South for landing." I couldn't believe my eyes or my ears. Wow! This was a rare, probably the only flyable, genuine Bf 109 flying right over my house in Mojave. Suddenly, a chilling feeling gripped me as I remembered that this was an enemy plane from WWII with Germany's madman Hitler in charge.

The White 14-Balkenkreuz-white cross on black disc with 04 tactical markings and light mottled fuselage paint scheme is based on photos of this aircraft during the Battle of Britain. The colors were carefully researched and applied, including the surface finish.

The Bf 109E aircraft was powered by a Daimler Benz DB601Aa engine and was capable of a maximum speed of 348 mph at 14,500 feet. Bruce Lockwood told me that it is known to be the loudest engine of all the warbirds when running. I was there when they ran it for the last time before it was disassembled for shipment to Canada. He was right; it was very noisy, but also most impressive! The 12 cylinder, liquid cooled, inverted-V engine developed 1,475 hp and the Bf 109 was the smallest aircraft they could build around the powerful engine.

In 2002, Bruce brought the 109 to the Hansen Hangar for Dan Sabovich's retirement dinner. Sabovich had served as General Manager of Mojave Airport and the East Kern Airport District (now known as Mojave Air & Spaceport) for over 30 years.

The Bf 109E was sold by the Santa Monica Museum of Flying to Ed Russell, aircraft collector, in Ontario, Canada. It was disassembled at Mojave Airport for shipment.