Tehachapi loses a farmer and a friend 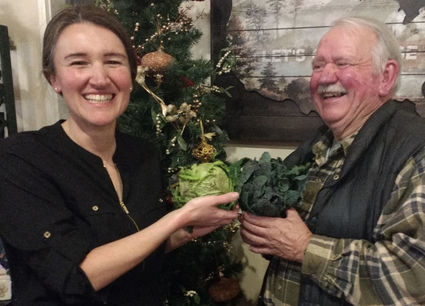 From your friend Teresa Dunlop at Tehachapi Natural Market

Some of you may have heard that our farmer, Charles, passed away unexpectedly several weeks ago. I am here to write a little history about my time with him and share some nice memories I have.

Like many, I remember him from under the blue tarp cover of his Highway 202 Farm Stand. Embarrassingly, I saw the sign for "rhubarb" for weeks, but I didn't go in until the third week of June when I'd finally got the nerve to try and make a pie only to discover that it was no longer in season! Being a farmer takes patience and I imagine you have to deal with this kind of "here and now" Zen: people who always want things out of season, like summer squash in the middle of winter. Years later and sharing a new perspective I fessed up to this.

Five months after the opening of Tehachapi Natural Market Charles came in. I remember him running a theory of some sort past me and apparently I did ok because after that he introduced himself. From there we talked about the logistics of bringing in fresh local produce. I thought it was going to be tricky but he believed we could do it and that we could make it work, and we did! That was the summer of 2018 and the start of us providing year round what would come out of the ground at his property close by and through his network of other local grower friends. We were pretty much guaranteed kale for 12 months in this climate. His business card stated: Charles Drew – Chief Dirt Digger.

Working with him we got to know him like family. If he heard laughter he'd want to know what was so funny. He would check in on my daughter and he would crack up merely at the kick she was getting out of whatever funny show she was watching, even if he admitted he didn't "get it." I am proud to say I knew him well enough to know he had at least three kinds of laughs. By definition I believe they would be a chuckle, a chortle and then one that was like a crack or exclamation, "HA!"

Charles was not shy. His experience working with people at the other markets he ran meant he would go right up to customers and offer them assistance. And I had a feeling he liked speaking before a crowd. The first time we showed a documentary supporting organic practices we had at least 20 in attendance. Charles got up to speak afterward and people wanted to talk to him going on for a good hour after the screening was over. He was really inspiring and I would have loved to see him go to regenerative agriculture conferences.

He was a college educated, intelligent man, very much the professional. He could talk about entomology (study of insects, part of zoology), chemistry, biology and he had been a writer for agriculture publications. He was raised in a family of farmers going many generations. I remember him getting stuck sometimes and saying, "Think, Drew!" Yes, he would talk to himself in the third person and he wasn't always the most humble and he could be ornery but that was just the Charles we knew and loved.

Owing to most of us being foodies at the market, I got to know his tastes a bit. He didn't drink coffee but he loved a specific kind of ginger ale that we carried for a while. And he loved our P-nutty shake, or anything with ice cream, as he claimed he could consume practically a gallon of it. Last year, when we started making soup, he was really pleased. Often at the end of the day he would come and help bring in the outdoor tables and we'd give him some leftover soup to take. Charles, I promise I will make a frozen sweet Maui onion smoothie in honor of you and I will drink it.

One of my best memories was of him wrangling a loose sheep that was making its way down Highway 202 toward us. We watched it from inside the market as it munched on various vegetation. Charles went to his famous white van, got a rope and slowly walked behind the sheep herding it a couple blocks away into a gated lot where there happened to be a rancher guy at the school that kept the sheep safe. Later the rancher came into the market to return Charles' "sheep rope."

Charles knew a lot of people and vice versa. He was "Tehachapi famous" and he got to reach some new people at the market. He often inspired them on their path to getting healthier with stories of his own transformation when he started eating fresh vegetables and fruits grown by his own hands, that were, in his words "better than organic, no sprays!"

He spoke admiringly about his friends and family. It was my pleasure to meet some of them and to those whom I have yet to meet, y'all sound really cool! He supported me from that first year, and worried about the business the second year, and was relieved I partnered with Sarah. He saw how well the market did that third year in spite of COVID. Farmer Charles was a "neighborhood favorite" and he was responsible for us winning that title on the "Nextdoor" app in 2019 for being the favorite location for a Farmer's Market.

An idea to start an outdoor "al fresco" area is currently blossoming into a project involving other community members who were touched by Charles and mentored and/or were supported by him in the ways of farming and gardening! We will be dedicating this space to him and will receive offerings of locally grown flowers for the planters.

So, in closing, when you see it, don't wait to make that pie or whatever it is. Keep eating the local produce. And keep appreciating those dirt diggers. Thank you, Charles, for all your years of hard work and service here and in this community. We will miss you.