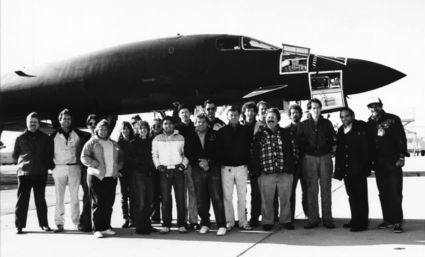 Doug, far left, stands with his class of students in front of a B-58.

This is the 10th article in a continuing series about local military veterans and their service to our great country.

Once again, we begin at the beginning: Doug McHenry was born in Chicago on October 5, 1947, at about noon. His mother liked to tease him that she missed Sunday dinner because of his birth! Doug was an only child. While the family lived in Gary, Indiana until 1960, Doug's father worked in construction in Chicago, helping to build tall commercial buildings and churches. As Doug recalled, "my father would put the lathe up on the walls or columns and create window openings for churches. He loved his work. He was an artist of sorts." In fact, building and construction go back for generations in Doug's family: "Most of us were tradesmen or craftsmen."

Yet by early 1960, construction work had temporarily dried up in the "Windy City," so in April of that year the family headed for San Diego, California, so Mr. McHenry could find construction work. Doug's dad came out to San Diego first to look for housing and secure a job; his wife and son followed on the train from Chicago.

Doug, now a young teenager, had developed a passion for cars and hot rods, so he was thrilled to move to California, "the capitol of hot rodding."

"When the train pulled into San Bernadino, I thought I had died and gone to heaven. Parked across the street from the train switch yard was a 1951 or 1952 customized Chevy! But in the eighth grade my English teacher told me and a friend we'd never amount to anything because of our love of cars and hot rods!" Little did she know!

McHenry found another lathing job in San Diego, while Doug attended Clairemont High School in the city, graduating in 1965. Doug wasn't interested in making a big "splash" in high school; he wasn't a "jock," or all that social. As he puts it: "I was still neck deep in hot rods!" After graduation Doug went to work at a gas station, then as a receiving inspector for Control Data Corporation. After work he'd meet other car enthusiasts at Oscar's Drive In, and from there they'd go out to drag race. Yet slowly he began to notice that there were less and less folks his age at the drive in-they'd either enrolled in college or joined a branch of the service, for American military involvement in Vietnam was clearly escalating.

Having no plan to go on to college, Doug decided to join the Air Force, enlisting in December 1966. On his military aptitude testing he scored "off the charts" (95th percentile!) for mechanical skills, opening up all kinds of career fields to him: "I could basically choose any career field I wanted. I chose to be a machinist, because that would help me attain the skills I needed to open an auto speed shop after I got out of the service."

Air Force basic training took place at Lackland AFB, Texas (and still does, I might add); yet once Doug arrived there he was disappointed to discover that the machinist career field was temporarily closed. As an alternative career field, he selected Aircraft Mechanic (for jets with more than two engines), which essentially meant working with bomber and large transport aircraft.

Following basic training, Doug was off to technical school at Chanute AFB, Illinois. After graduating in May 1967, Airman Second Class McHenry was assigned to March AFB in Riverside, California. By 1969, he had become a crew chief for a B-52 "Stratofortress" strategic bomber of the 22nd Bomb Wing, whose mission included nuclear alert (this was just a few years after the Cuban Missile Crisis and the Cold War with the Soviet Union was still quite "hot.") As Doug remembered, "I loved the B-52. To this day I love the airplane. It was a fantastic airplane. If I could drop my crutches, I'd still fly on one. It was an incredibly reliable airplane." In the meantime, Doug had also fallen in love with a young lady, tying the knot in March 1967. The marriage-although eventually ending in divorce-brought forth three sons, in 1968, 1969, and 1971.

While stationed at March AFB, Doug went TDY (Temporary Duty) to Guam, Okinawa, and Thailand, in support of B-52 "Arc Light" operations in Vietnam. (During Arc Light from 1965 to 1973, US Air Force B-52s, operating from Guam, conducted air strikes on enemy bases, supply routes, and against troop concentrations, on occasion even providing close air support for Army and Marine Corps ground troops.) His first TDY to Guam took place in early 1968. "North Vietnamese regulars had attacked the Marine base at Khe Sanh. Our bombers and tankers flew around the clock, seven days a week, for two weeks solid. We we so busy doing maintenance, or launching and recovering aircraft, that we hardly ever got off the ramp, we got sleep when we could. It was a baptism by fire. You really found out who pulled his weight and who didn't. It was the only place I learned to sleep standing up in a B-52 wheel well for protection during a monsoon."

Doug had many memorable experiences while serving at March AFB, but there was one in particular that still stands out. "In the summer of '68, I went home for the weekend to see my parents in San Diego. I walked in the door and one of my best friends from high school was there. I said, 'hey, how are you doing?' He replied, 'I just got back from Vietnam, I'm in the Marines.' I didn't know this as I hadn't seen him since we graduated high school. He asked me what I was doing. I said, 'I just got home from Guam, I was supporting Arc Light operations.' At that his eyes got big; he said, 'I was at Khe Sanh, you saved my life.' It almost brought me to tears."

Doug departed March AFB in May 1970 and was reassigned to Chanute AFB as an instructor for aircraft maintenance (for jets over two engines). "My time at Chanute as an instructor helped to change my life. It taught me how to cross my 'Ts' and dot my 'Is.' I learned to never open my mouth unless I could back it up-that has been a Godsend to me for the rest of my life. As an instructor you take a person from the unknown to the known, and it's an incredible feeling to watch the transformation of that individual as he learns his craft."

In December 1972, Staff Sergeant McHenry was assigned to Travis AFB, California, to this day a major Air Force transportation hub. Once again he had the major responsibility of a crew chief-this time for a massive C-5 "Galaxy" transport. Unlike the B-52, however, Doug despised the C-5. As he explained it, the aircraft was mechanically unreliable and, thus, frustrating to work on; moreover, he found the culture in Military Airlift Command to be much more casual ("there was much less discipline") than in Strategic Air Command. "It was just mass insanity. Nothing made sense to me at all. On one occasion a C-5 crew held up their flight to Vietnam because they hadn't received their hot coffee, when they could have made it themselves in their own galley!"

Less than a year later (September 1973), Doug was mustered out of the Air Force. Although on track to become a technical sergeant, he turned down the potential promotion. "If I had re-enlisted, I would have made technical sergeant within a year, but I also would have been locked in for about five years working on C-5s at Travis and I didn't want to do that. This was a pivotal time. If I hadn't gotten out then, it would most likely have been in for 20 years."

After leaving the Air Force Doug was able to parlay his military experience into a highly active, and remunerative, professional life. At first, he went back to San Diego, working for several Ford dealerships and becoming a jack of all trades--"I became a bumper to bumper mechanic, I did it all." After leaving Ford in the mid-1980s ("I got tired of the automobile repair business; got kind of burned out"), he took a position with Rockwell International, working in Lancaster on the B-1 Bomber program.

In 1988, Doug remarried, he and his second wife having two more children ("we had seven children in our blended family, as my wife came to the marriage with two of her own"). The next year (1989), he joined Douglas Aircraft, working on the C-17 transport and other aircraft as a flight test mechanic. Laid off from Douglas in 1994, he went to work for the famous Lockheed-Martin "Skunk Works" in Palmdale for several years: "I can't tell you what I did at Lockheed; if I did, I'd have to kill ya! It was really secret stuff." 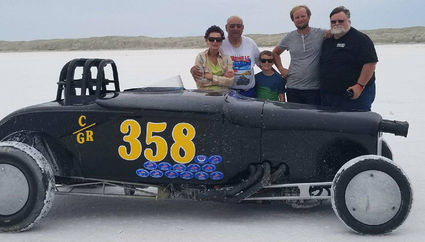 Several years later (1997), the peripatetic McHenry moved on to yet another position, this time employed by the California Department of Corrections at their correctional facility in El Centro as an automotive instructor. He worked there for two years. In 1999, Doug received an offer to transfer to the correctional facility just outside Tehachapi. He jumped at the opportunity: "Tehachapi was a pretty area, close to Lancaster were we lived, and it wasn't El Centro!" In 2004, having caught the "Tehachapi bug," Doug finally joined our community, purchasing a home in Stallion Springs.

Medically retired since 2012 due to work-related injuries, Doug continues to enjoy his retirement playing with his hot rods and race cars.

Doug McHenry-We Tehachapians honor you for your selfless service to our great nation in times of war and peace!