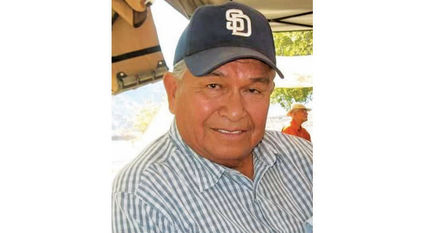 Friends and family members are mourning the loss of Nuwä (Kawaiisu or Southern Paiute) elder Ralph Luther Girado, 79, who passed away on February 7 in Bakersfield. Luther was a Nuwä elder and the last fluent male speaker of his Native language.

He was born on March 26, 1941 in Twin Oaks, California, the son of Rafael and Gladys Leon Girado. Luther was very proud to tell you that when he was born, his father was the delivery man. He had a close-knit family, and he helped with chores every day from the time he was a little boy. He loved to spend time with his friends as a kid, riding bikes and fishing in Caliente Creek after it was stocked with fish following the 1952 earthquake.

As a teenager, he loved driving a car his father gave him, which he and his cousins cut down to make into a hotrod. Luther and his friends would race the cars up and down Caliente Creek Road.

Luther was married for 36 years to Vivian Diane Queen Girado, formerly of Bakersfield. Luther worked for many years as a pipefitter with West Valley Construction of Bakersfield and was a member of the Plumbers and Pipefitters Local 460 Union. Luther lived in Walker Basin at the time of his passing and he spent his entire life living in Caliente and Walker Basin.

Luther enjoyed playing his guitar, including practicing at 3 a.m. when he got up, teaching his ancestral Nuwä language, watching sports on TV, and going to Native gatherings where he had many friends.

His favorite favorite food was steak -- he always told his son-in-law David he wanted steak for lunch. Classic country music was his favorite to listen to and play and he enjoyed watching football, wrestling and NASCAR. He loved to hunt and explore in the Piute Mountains and Walker Basin and he appreciated their quietness and beauty. He daily enjoyed observing the wildlife roam around his home and he put out food and water for them. He watched quail, rabbits, bobcats, raccoons, black bear and more. Until he got sick at the very end of his life, he took care of livestock every day at the neighboring Cielo Azul Ranch, and he had a tractor that he used for doing road work for neighbors in the Basin. He cherished playing his guitar and singing with his band, the Piute Mountain Boys.

Luther was always joking around, laughing, enjoying working with language documentation and teaching language with his family. He was happy playing in his band, the Piute Mountain Boys, at local events. He was proud to share his Native American language and culture with everyone. Among his yearly highlights was meeting all of the many Native American language speakers from all over California and becoming fast friends with them.

He is survived by his sister Lucille Girado Hicks, and his children Julie and her husband David Turner, daughter Joy Girado and her partner Galen Golden, and son Brian Girado. Also by his grandchildren: Loreen Park Carothers, Bud and Patricia Turner, Cody and Britany Park, Alexandra Girado and Echo Girado. In addition his great-grandchildren: Chase and Kailyn Turner, Jacob, Eli and Lane Carothers, Duane and Braxton Park, Cybille Girado-Jobin, and many nieces, nephews and cousins.

There will be a private family graveside and memorial service, invitation only, at a later date and time. He will be interred on Indian allotment land in the Walker Basin/Rancheria area.