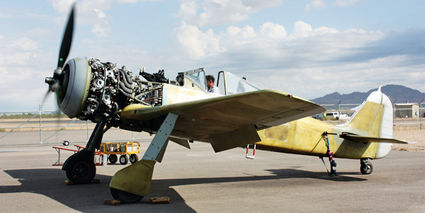 My husband Al and I had a special opportunity last week to visit with Mike Nixon at Vintage Radials and watch the running of a very rare German aircraft engine from a World War II fighter. This very engine powered a Focke-Wulf 190 that actually downed many of our fighters and bombers in combat during the war, yet those who love history want to preserve this impressive adversary and bring her back to life in flying condition. There is no desire to rewrite the history.

Mike Nixon is the President/CEO of Vintage V-12s, Vintage Radials and Vintage Carburetors and located in Tehachapi in 1986.

All mechanics, engineers and warbird enthusiasts appreciate what Mike has accomplished with his exemplary businesses.

Vintage Radials is the newest addition to the Vintage V-12s and Vintage Carburetors family and was established in 2007, after the acquisition of Aircraft Cylinder & Turbine, Inc.

Mike has taken on the enormous task of restoring a second German BMW 801, 14-cylinder, air-cooled radial aircraft engine that powered the Focke-Wulf 190 in World War II. Many people believe the Fw 190 was the greatest fighter of the war.

When he was restoring the first BMW 801 German engine, he had to translate all of the engine manuals from German to English. When he completed building the engine, it was placed back on to the original Fw 190 aircraft that was magnificently restored by Gosshawk Unlimited, Inc. in Casa Grande, Arizona. The first flight was piloted by Steve Hinton for Microsoft co-founder, Paul Allen's, Flying Heritage & Combat Armor Museum in Everett, Washington.

David Goss said, "It's ironic that I am restoring German Fw 190s, since it was this type aircraft that shot my father down in World War II. He spent the rest of the war as a POW. He was a navigator bombardieron a B-17, while serving in the U.S. Army Air Corps."

Their website states, "Our team at GossHawk Unlimited has been involved in all aspects concerning the restoration and maintenance of aircraft. From original World War I airplanes and replicas, through the gamut of World War II warbirds and Vietnam era aircraft, we do it all. Our extensive experience includes both American and foreign aircraft designs, and ranges from older wood and cloth constructed airframes to more modern jet based aircraft."

From Flying Heritage website: "When it first entered combat, the Focke-Wulf was the most advanced radial engine fighter in the world.  Its appearance in the fall of 1941 was a rude awakening for Allied designers and pilots. The new German plane was an ideal dogfighter-fast, light, and small. It was more than a match for contemporary versions of the British Spitfire. The Focke-Wulf 190 was also heavily-armed and immensely strong, giving it the ability to fly in ground attack roles as well."

"Forever compared to the Messerschmitt Bf 109, many German fighter pilots considered the Fw 190 the better plane at medium to low altitudes. Later in the war, improved versions of the Focke-Wulf fighter were designed to perform at heights above 20,000 feet."

The Germans called the Fw 190 Würger or "Butcher Bird."

Quote from WorldWarWings website: "The painstaking process of restoring the Flying Heritage Collection's aircraft sets them apart from all other aviation artifacts, each restored to a level of authenticity never attempted before. FHC's team exhaustively researches and seeks out original vendors to reconstruct materials and components that have become obsolete. From cotton-coated wiring and lacquer and enamel paint to vintage cockpit furnishings and original radios that still operate, these planes are as authentic as is possible."

Mike's team manufactured special tools that are unavailable today, and they documented each part so the re-assembly was correct. The engine run-up was conducted on the special test stand built onto the back of a large flatbed truck.

"We like to keep 'em flying," said Nixon at a Plane Crazy Saturday event held in 2016. The company has customers from all over the world. They are the vintage aircraft collectors or flying museums that know Mike Nixon is the 'go to' guy when it comes to rare aircraft engine restoration.