Someone To Watch Over Me 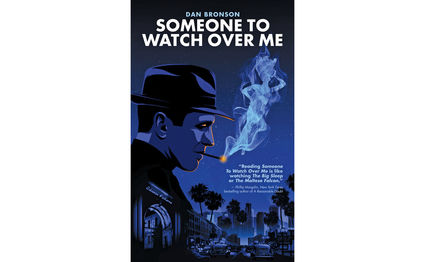 Dan Bronson, long-time resident of Bear Valley Springs, has written a novel scheduled for a March 9 release. It's a hard-boiled mystery called "Someone To Watch Over Me."

The book has been getting remarkable pre-publication reviews from major figures in the literary and film world-figures like New York Times best-selling author Phillip Margolin, who has said, "Reading 'Someone To Watch Over Me' is like watching 'The Big Sleep' or 'The Maltese Falcon.'"

The story is set in Hollywood in 1947. Dan's narrator-hero Jack Shannon, a former actor whose promising career was interrupted by the war and ended by a facial scar sustained in combat, is now a studio publicist.  He jokes that the only thing he knows about publicity is how to suppress it, but that, in fact, is his real job.  He's a fixer who babysits the studio's stars and covers up their bad behavior, and he's good at what he does because his experiences in Europe have left him morally and emotionally numb. It's easy for him to whitewash breaches of ethics and the law because he simply doesn't care.

Everything changes for Jack when Savannah Stevens enters his life.  A sexpot star in the mold of Jean Harlow and the studio's biggest box-office draw, she's a deeply troubled young woman given to emotional breakdowns, unexplained absences from the set, and time-devouring delays occasioned by her paralyzing insecurities and her insistence on dozens of takes.

Jack's job is to stay with her 24/7, deliver her to the set on time each day, and make sure she completes her current picture, a picture on which the future of the studio depends.  All goes well until Savannah disappears, and Jack is assigned the task of finding her...without revealing to anyone, including the police, that she is missing.

"Someone To Watch Over Me" is Dan's first novel, but he's someone whose had many careers in the literary and film worlds: Associate Professor of English at DePauw University, Senior Story Analyst at Universal, Associate Story Editor at Filmways, Executive Story Editor at Paramount, Writer-Producer of HBO's Ed Harris thriller "The Last Innocent Man" and NBC's cult classic "Death of a Cheerleader," and author of the memoir "Confessions of a Hollywood Nobody."

Dan says he's astonished at the reception his book is receiving. He was thrilled to get a call recently from the author of an upcoming review, who compared his ending to the conclusion of "Chinatown," and he's especially pleased to have received an invitation to appear with Phil Margolin on The Poisoned Pen Bookstore's "Book Chats," an interview show whose previous guests include Michael Connelly, Walter Mosley and many other masters of the mystery genre. Dan and Phil's episode will be posted on March 10 on The Poisoned Pen's website and its Facebook page.

The book itself is already available for pre-sale on the Amazon and the Barnes & Noble websites. For further information about Dan and his books, check out Dan-www.Bronson.com and http://www.Hollywood-Nobody.com.