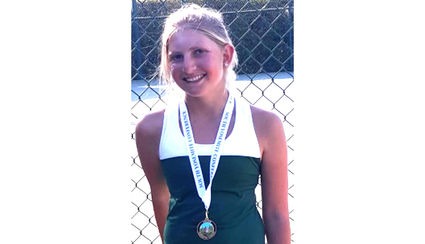 After a successful three-year stint for the Tehachapi Lady Warriors tennis team from 2017-19, standout tennis player Catrina Hibbard recently received news that she will be able to take her game to the next level, signing a letter of intent to play at Hope International University (Los Angeles) on a four-year scholarship starting next fall.

The amount of total scholarships that Hibbard is receiving from Hope International is valued at $45K a season, or $180K over four years.

"We have gone on a lot of recruiting trips as a family to check out different (college) campuses that were interested in me joining their tennis team over the last year or so," said Hibbard. "The coaching staff and the players at Hope were just so friendly and inviting, and the campus was really nice. It was a great fit."

Hibbard received interest from multiple schools, some of which included Concordia, Westmont College-Santa Barbara and Point Loma Nazarene before settling to play for the Royals.

The receipt of a college scholarship came with determination, sacrifice and hard work from Hibbard since first picking up a racket nine years ago. Since the very beginning, she has received instruction from Bear Valley Springs Tennis pro Rick Lund.

"Catrina has always been committed to this sport and she has put in the work for many years," said Lund. "There have been days where the weather hasn't been the best, but she would still be out on the courts working out, taking lessons, and getting better. She is a dedicated young lady and Hope International is getting a good one."

Over the course of her high school career, Hibbard has amassed a record of 40-14 singles, reaching the individual south-area finals and playing in the No. 1 singles position on her team all three years. She was also selected as the team most valuable player after her 2019 junior season.

"I really credit Coach Rick for helping me get to where I'm at today. He has been with me from the very beginning and I really appreciate all he has done for me," added Hibbard.

When not playing high school tennis, Hibbard is active playing tournaments all throughout the country, having played in events in Oregon, Washington, Illinois, Missouri, Idaho, Nevada and California.

Also a very good student, Hibbard currently holds a 3.8 grade point average halfway through her senior season. She also has the unique distinction of being the president of the Oak Tree Tennis Club - Bear Valley Springs, the first time a junior member was voted into office in the 30+ year history of the club.

Her sophistication in playing a wide-variety of tennis all throughout the country, along with her academic acumen, should bode well for her at the next level.

"I am really looking forward to playing tennis at Hope. I'm currently training hard to get ready for the next level of competition," Hibbard said. "It really is a dream come true and I can't wait to get started."