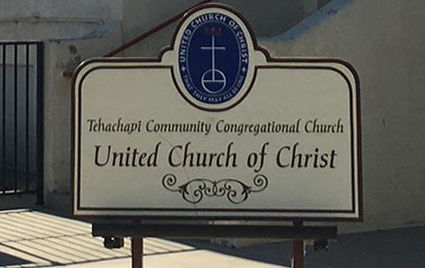 Required to meet outside or virtually, churches have faced difficulties during the COVID crisis. However, it was during this period that Tehachapi Community Congregational Church (UCC) had an additional challenge. In September of 2020, Pastor Nancy Bacon submitted a request to retire as soon as a replacement for her could be found. She had been pastoring the Church since February 2013 and was looking forward to more time with her husband, children and grandchildren. The congregation held a special farewell celebration in December to show how much they loved and appreciated her. They presented her with a special Memory Book highlighting her years of leadership.

A search was undertaken to find a replacement for Pastor Nancy Bacon. After several meetings and interviews, Pastor Donella Silveira was hired and began preaching on the first Sunday in January. She will serve as Interim Pastor, and part of her duties include assisting the Church in locating a Permanent Pastor.

Pastor Silveira graduated from San Francisco State with a B.A. in music and became a classroom teacher. Then she earned an M.A. in Educational Administration and served as a principal in Burlingame and San Jose. She enjoyed her career in education, but from the age of seven she had felt a call to the ministry. Retiring from her first career, she and her husband, Bill, moved to Columbus, Ohio, so she could attend Trinity Lutheran Seminary.

After graduating with a Master of Divinity degree, she was ordained and installed as pastor of Prince of Peace Lutheran Church in Lincoln, Nebraska. She also served churches in Chadron and Kimball. She retired ten years ago, and moved to Bakersfield. Since then, she has served as interim pastor for congregations in Mojave, Bakersfield and Lancaster.

It is a difficult time to be a new pastor when church members are only seen on Zoom or behind masks. However, Pastor Silveira is up to the challenge. She drives to Tehachapi three days each week and attends meetings on Zoom whenever they are scheduled. She has already endeared herself to the congregation, and the church looks forward to growing under her leadership.

Tehachapi Community Congregational Church is located at the corner of Green and E Streets. Sunday worship is currently held live on Facebook at 10:30 a.m. Office hours are Wednesdays from 9 a.m. until 1 p.m. Messages may be left at (661) 822-4443.