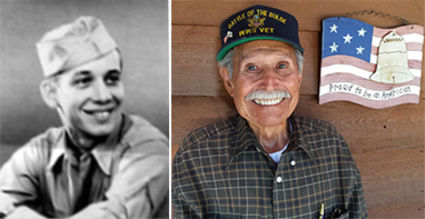 Both of the U.S. Army veterans addressed in this article-the eighth in a continuing series about local military veterans and their great service to our country-saw combat in Western Europe in the final phases of World War II. Both men, now deceased, took part in major action during the unexpected German counteroffensive through the Ardennes forest in December 1944, what is called in popular parlance the "Battle of the Bulge."

Barely 18 years old, Henry Martinez joined the U.S. Army in June 1944, just as the Anglo-American invasion of Normandy, France, was getting underway. Following just four weeks of basic training, he was on his way to Europe to join the 28th Infantry Division (110th Battalion, Company "B"). The Division had departed the United States and gone overseas in October 1943, arriving in South Wales shortly thereafter to begin training for the invasion of France. On July 22, 1944, seven weeks after the D-Day landings, the Division arrived in Normandy. The men of the 28th Division fought their way through France and, on August 28, entered Paris and were given the honor of marching down the Champs-Elysées the next day in the liberation of Paris.

While it is unclear when Henry arrived in France, he may very well have been with the division when it marched into Paris. Eventually, his 28th Division made it to the Ardennes forest, which ran through Belgium and Luxembourg. Although this densely forested region was close to the German frontier, it was considered largely safe from attack, and thus used as a rest area for American troops and as a place to "break in" green troops.

That all changed, however, on December 16, 1944, when Adolf Hitler launched a desperate last ditch effort to push through to the Allied port of Antwerp, split the British and American forces, and force the Western Allies to settle for a negotiated peace with Nazi Germany. The entire divisional front of Henry's 28th Division was struck by a powerful German tank army. Fighting back doggedly against superior enemy forces, and throwing all available personnel into the battle, the 28th succeeded in disrupting the enemy's timetable before pulling back on December 22 to refurbish its badly mauled formations.

During the Battle of the Bulge, Henry distinguished himself by making solo trips at night behind German lines to gather vital intelligence, while also engaging in combat as a sniper and 50 caliber machine-gun operator. The winter of 1944/45 in northern Europe was quite harsh. Henry and his fellow soldiers hunkered down in foxholes they had carved out of the ice, tossing in leaves to gain at least a modicum of protection from the arctic cold. On one of Henry's foray's behind enemy lines he suddenly found himself face to face with a German soldier; however, instead of making use of their weapons, both men reasoned that, in this case, discretion was the better part of valor! They simply went their separate ways without a shot being fired.

The Battle of the Bulge concluded in late January 1945, with the badly attrited German forces staggering back in defeat. By the end of the war in Europe, Henry, for his distinguished service in the European theater, had garnered the Bronze Star, Purple Heart and the French Croix de Guerre. Due to injuries sustained, he spent two months in a European hospital before being transported to Fort Lewis, Washington, to complete his recovery. All told, his 28th Division experienced 196 days of combat, incurring nearly 17,000 battle casualties, including 2316 killed in action.

Although small in stature, Henry Martinez was a tenacious warrior who loved his country and his fellow soldiers dearly. A long-time resident of Tehachapi, he passed away on January 9, 2017 at the age of 91.

Arthur William ("Bill") Jasper enlisted in the U.S. Army in early 1943 at the age of 17. Like Henry Martinez, he was soon shipping out for the European theater of operations, where he would see combat with General George S. Patton's Third Army. Initially, Bill served in an infantry division, however, sometime before the Battle of the Bulge he volunteered for transfer to the Army Air Corps (AAC). Yet a short time after reporting to the AAC, the Germans launched their Ardennes offensive. The infantry company Bill had previously served in was virtually wiped out by the savage enemy assault. Needing replacements at the front lines, Bill was rapidly transferred out of the AAC and assigned to a unit of combat engineers.

U.S. Army combat engineers played vital roles in the Second World War. For example, they facilitated the movement of friendly forces by breaching enemy obstacles, eliminating enemy strongpoints, minesweeping, and building roads and bridges. They slowed the advance of enemy forces through such actions as laying mines, constructing fortifications for defending friendly forces, or blowing up bridges to impede enemy progress. Combat engineers were also trained to fight as infantrymen, and often did so during crisis situations on field of battle.

While it is unclear which combat engineering unit Bill fought with, his activities would have embraced at least some of those outlined above. During the Battle of the Bulge, Bill serendipitously survived an incident that could have easily led to his death: due to the arctic cold, Bill and his fellow engineers sheltered three to a foxhole. Every so often the men in the foxhole rotated. On one occasion, Bill rotated out of the middleman position to being on the left. No sooner had he done this than the new man in the middle was shot dead by a German sniper. Just another example of how survival in war often comes down to luck, physics, or God's unknowable plan.

Bill survived the Second World War and served in the Army reserves until 1965, retiring with the grade of Major. In 1954, after completing his undergraduate studies, he earned a doctoral degree in agriculture from Cornell University, New York. Bill went on to become Director of Marketing for the American Farm Bureau Federation and President and General Manager of West Coast Egg Producers. Bill, in fact, was the one who coined a "spiffy" phrase anyone of us old-timers should readily recall: "the incredible, edible egg!" In 2004 or 2005, he journeyed back to Belgium for the 60th Anniversary of the Battle of the Bulge. It was a moving experience for Bill, who was deeply touched by the young children who approached him and thanked him for what he had done to liberate their country from tyranny. 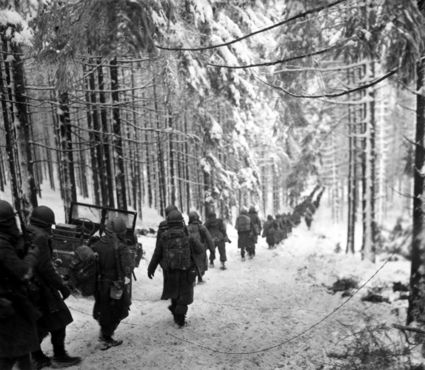 Bill was also one of just six veterans who founded the Major Jason E. George VFW Post 12114 some 10 years ago. A longtime resident of Stallion Springs, Bill Jasper passed away on June 7, 2012. And Tehachapi, and America, lost another irreplaceable hero.

Henry and Bill-although you are no longer with us, you are not forgotten. And we will never forget the heroism with which you served our great country!