Beauty on the wing: the birds of winter 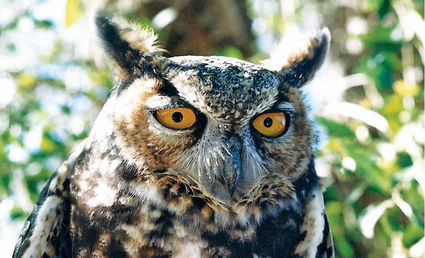 Great Horned Owls actually nest in winter, and you can hear them hooting as winter approaches. Photo by Jon Hammond.

Winter is here, and we have some feathered visitors that we don't see much in the warmer months. Let's take a closer look at some of the birds that choose to spend their winters among us.

First, here's a couple of simple numbers to help you better comprehend bird life in the Tehachapi Mountains. There are about 250 different North American bird species that have been identified in our area. Some of these are here year-round and are seen daily, others only seasonally, and a handful on the list have only been spotted a few times in 30 years. But that's the total – about 250 species.

Now, at any given time during the year, there are about 115 bird species that are present somewhere throughout the greater Tehachapi area. Some abundant, others are scarce and very hard to find, but they're here.

What naturalists and outdoor observers, especially birders, find endlessly fascinating is the fact that from season to season, different species are represented. As the year changes, some birds leave, some stay and some new ones arrive.

So even though the number of species found in our area hovers (and soars) at a total of around 115, the particular makeup of the avian crowd changes as the months go by. These figures were obtained through years of experience and countless birding hours by a small group of local birders, led by Jean Moore and her late husband Clark Moore, who together were a nexus for birding and who started the Tehachapi Mountains Birding Club.

One of the most abundant and easy to identify of the birds that have joined the 115 species of the Winter Cohort is Dark-eyed Juncos (Junco hyemalis). These are a type of sparrow that is super easy to recognize – we have what is known as the "Oregon" form or race, with faintly mahogany brown backs, light chests and dark caps.

These small songbirds with their dark hoods often forage in mixed flocks with other sparrows, like another winter-abundant species, the White-crowned Sparrow (Zonotrichia leucophrys). The White Crowns look like they're wearing little skunk caps, with alternating white and black stripes on their heads.

Both of these bird species can be found locally at higher elevations in the warmer months, but in winter their numbers seem to increase by an order of magnitude and they are found on the valley floors and at backyard birdfeeders where they are pretty much completely absent in summer.

One of the most beautiful winter visitors is seldom seen, but does forage in the western foothills and lower west-facing slopes of our mountains, just above the San Joaquin Valley floor. This azure blue gem is the Mountain Bluebird (Sialia currucoides). We have lovely Western Bluebirds year-round, but sometimes Mountain Bluebirds visit, and the males are unmistakably soft blue beauties, like little pieces of the sky transformed into birds.

American Robins can be found here in warmer months, even building their distinctive clay-reinforced grass nests in local trees, but sometimes you can see flocks of them during the migratory period between seasons. They are particularly drawn to trees and shrubs with berries for them to gorge on.

Many different types of waterfowl can be found here during the fall and winter that are completely absent during spring and summer. Even though we don't have any large bodies of water, migratory waterfowl still manage to find and occupy our lakes and ponds, like Brite Lake, Four Island Lake and Cub Lake in Bear Valley Springs, Stallion Springs Lake, the little ponds at Indian Hill Ranch and the Norbertine Monastery, etc.

These assorted species of geese and ducks, including teal, widgeon, mergansers, and others form small mixed "rafts" of birds that bob and forage in local waters. They are sometimes joined by a rare but unforgettable winter visitor: the Bald Eagle (Haliaeetus leucocephalus). A Bald Eagle or two have been spotted in the course of numerous different winters, usually at Brite Lake or in Stallion Springs.

Most birds are not as vocal in winter, but there is one resident that is noisier than ever as winter approaches: the Great Horned Owl (Bubo virginianus). They are typically the first birds to nest, beginning in January, and they begin setting up territories in October and November, so you can still hear them hooting when days grow short and nights grow cold. 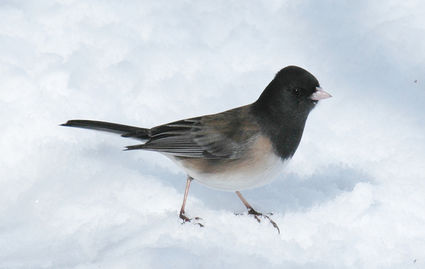 Dark-eyed Juncos are especially abundant during the winter months.

The Tehachapi Mountains are home to an interesting variety of avian life, and over the course of a year, when some birds depart because the days are getting too short or too long, other birds arrive to take their place. It is an ancient and ever-changing succession.