Winter has arrived: how cold can it get in Tehachapi?

Following a snowstorm, the snow warmed during the day but then was frozen into a glistening ice shield at night in this flood control channel south of Highline Road.

With the arrival of the Winter Solstice on December 21, we're now officially in winter. So what kind of weather does Tehachapi get in January? And how cold can it really get?

Well, the coldest temperature on record in the Tehachapi area occurred on the night of December 20, 1990. A brutal cold snap was expected, and it definitely arrived. I was up off and on during the night checking the weather, and I watched as the thermometer outside our kitchen window dropped each time I checked it: 5 degrees, 3 degrees, 0 degrees Fahrenheit, then -1, -2, -3, and finally at about 4 a.m., it hit -4. Yes, 4 degrees below zero.

At the east end of the Tehachapi Valley, the elevation is slightly lower, so it forms a frost pocket where cold air sinks and flows along the valley floor. At Fred Patterson's orchard on Tehachapi-Willow Springs Road, which is now the Benz Visco Sports Park, the temperature dropped to -14 F.

As you might expect, water pipes broke all over town. It took days for the full damage to be revealed, because many pipes broke but the water inside them was still frozen, so it took several days for the water to thaw and breaks to be exposed. Some ornamental trees and shrubs that were more than 20 years old died from the intense cold.

By the time the freezing temperatures warmed on January 3, more than 200,000 acres of citrus crops in the San Joaquin Valley were destroyed. Avocados, pistachios and olives were also damaged. Agricultural losses were estimated at about $1 billion.

Fortunately, low temperatures that extreme are rare. But it also got to -4 degrees in December of 1967, and -2 in 1926. So it's very uncommon, but not unheard of. And will likely happen again eventually.

As we enter January, keep in mind that weather this month in Tehachapi can be snowy, windy and extremely cold, or it can be sunny and mild with temperatures in the 60s. Some of the strongest (and at times competing) influences on Tehachapi weather are these two realities: one is that we are in the mountains at 4,000 feet above sea level, which brings rapidly changeable weather, low temperatures and occasional snow; the second is that despite our elevation we are still in Southern California, albeit on the northern edge, which brings abundant sunshine, mild weather and warmer temperatures.

So those are two of the most important dynamics to keep in mind when trying to understand or decipher Tehachapi weather. It's akin to the argument in the old light beer commercial – "Tastes great. Less filling. But it tastes great. But it's less filling..." Only in the case of our weather it's this: "We're in the mountains. Yes, but we're in Southern California. But we're at 4,000 feet. But it's still So Cal..."

So we do have some cold temperatures in January, which is the main month of winter. The mercury always drops into the 20s and sometimes the teens, and occasionally lower. In certain years, much lower – 1979 posted a January low of 8 degrees Fahrenheit, 1960 had a January low of 7 degrees and in 1957 it dropped to only 2 degrees.

And January weather has been even colder in Tehachapi's past – other January low temperature records include a reading of 5 degrees in 1935, 1 degree in 1930, a low of 0 degrees on a January night in 1949 and a chilling -4 degrees Fahrenheit in January of 1932.

If coupled with the precipitation that sometimes begins in late October or November (not really this year), these warm temperatures turn the grass green and help the nascent wildflowers to start growing, so a walk in the Tehachapi Mountains on a warm day in January can feel like a spring stroll, even while other parts of the U.S. shiver in snow and subfreezing temperatures. 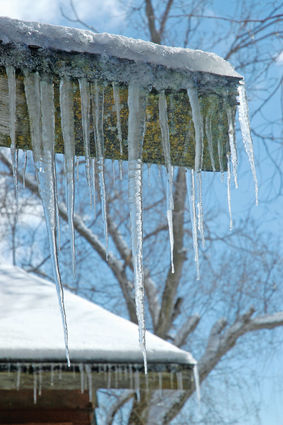 Icicles form on a cold Tehachapi night when melting snow drips off a roof and is re-frozen into tapering ice carrots.

So enjoy our January weather, since at least some of it should be to your liking, whatever your preference – snow, warm sunshine, ominous dark storm fronts, rain, fluffy cumulous clouds in a blue sky... Typically January highs are in the 50s and lows are in the 30s, but then again "typical" is not a word commonly associated with our weather.