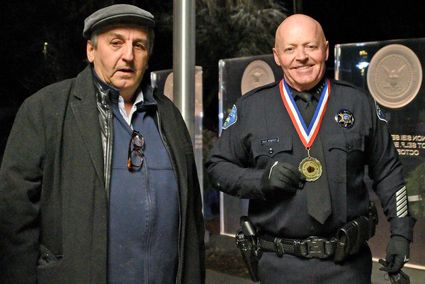 On December 18, after the 6 p.m. "Wreaths Across America" program at Freedom Plaza in Tehachapi, veterans and shop owners in Tehachapi presented Police Chief Kent Kroeger and the TPD with memorial posters of Tehachapi's WWII veterans who the department honored with a reception and tour of the new police station.

Capt. Ed Sullivan of the National WWII Memorial Committee and Laura Coaly of Witt's printing made the WWII veterans posters for the Tehachapi Police Department in memory of the respect and courtesy the Department has shown to the "Greatest Generation" of Tehachapi veterans.

Capt. Jim Jacobs of Tehachapi's veterans Patriot Guard presented the memorial poster honoring Capt. Robert "Bomber Bob" Wood, who survived 35 bombing missions over Nazi Germany. He returned home after the war to serve as one of the lead engineers to build the THOR Missile at Edwards Air Force Base. Capt. Jacobs proudly inducted "Bomber Bob" Wood on his 93rd birthday as the nation's oldest known member of the Patriot Guard on the steps of the Tehachapi Historical Museum on Green Street.

Capt. Ed Sullivan, one of the 50 state chairmen appointed by Congress to work under Sen. Bob Dole to build the National WWII Memorial in Washington DC, presented to the TPD the memorial poster of Cpl. Joe Tays, Tehachapi's last survivor of the Japanese bombing of Pearl Harbor. Capt. Sullivan who served on the WWII Committee with Cpl. Joe Tays had the honor to help transition Joe from his home at Mountain Estates in Tehachapi to the William J. "Pete" Knight veterans home in Lancaster after the passing of his wife Pauline.

Cpl. Joe Tays, a retired Captain with Kern County Fire Dept. had a memorable memorial service at the Moose Lodge coordinated by Harriet Clendenin and Staff Sgt. John Grenek to retire his Pearl Harbor flag received from State Senator Shannon Grove after being voted California's Veteran of the Year in 2013 in Sacramento.

The April 2017 reception at the Moose Lodge was held after the Tehachapi Patriot Guard provided honor guard for Cpl. Joe Tays to be joined with his beloved wife Pauline at the Arvin National Cemetery.

Tehachapi resident Pat Phelps joined the reception and gave a nice honor to her dad Peter Whitlow who was at the D-Day invasion with Staff Sgt. John Grenek.

Tehachapi resident Jane Grenek shared at the Moose Lodge reception that she married her husband John on the same day in 1942 as Joe and Pauline Tays married. Both are charter members of Tehachapi's Moose Lodge.

It was an exceptional show of respect by Police Chief Kent Kroeger to receive Tehachapi's WWII veterans for a reception at the new police station. An event that was memorable to Cpl. Joe Tays late in life as he noted the growth of Tehachapi during many visits by Capt. Sullivan at the veterans home in Lancaster.

On one of Sullivan's last visits with Joe Tays at the William J. 'Pete' Knight veterans home Tays asked Capt. Sullivan to convey appreciation to Chief Kroeger for his warm welcome to the veterans at the new police station saying, "remind Chief Kroeger that the Peace we fought for Overseas is the young Tehachapi officer's duty to keep at Home!" -Cpl. Joe Tays, Tehachapi's last survivor of Pearl Harbor. 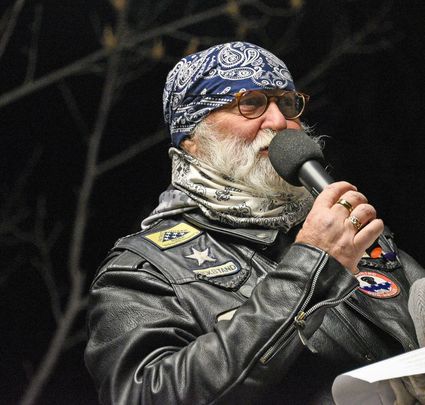 Capt. Sullivan of the National WWII Committee and Capt. Jim Jacobs of Tehachapi's Patriot Guard presented Chief Kent Kroeger on behalf of the department with the WWII Memorial Peace Medal for the respect Tehachapi peace officers have shown to our veterans.

Tehachapi veterans with the presentation of the veterans Memorial posters extend "sincere thanks" to the Tehachapi Police Department for the memorable respect they have shown to Tehachapi's "Greatest Generation" of Veterans.