Parade fans from all over town turned out in cars parked along the parade route, youngsters on blankets sitting curbside, and residents on lawn chairs in their front yards all turned out to watch the home grown parade.

After the annual Christmas Parade was canceled due to COVID concerns community members reached out to each other to hold their own parade. "Instead of the people coming to the parade, let's take the parade to the people," stated co-organizer Jenn Michael. 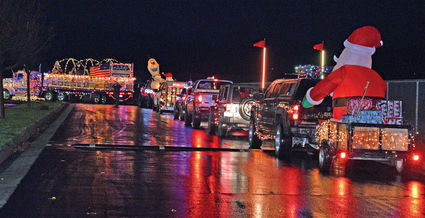 Some of the nearly three dozen homemade floats at Saturday's pop-up "Reverse Down Home Christmas Parade."

And so they did, by word of mouth and in just a few weeks time, the idea of a "Down Home Reverse Christmas Parade" as it was labeled, caught on and grew in community interest. On parade night over three dozen floats, cars, motorcycles, trucks and even a towed boat arrived at the Saturday night staging area festooned in banners, holiday ribbons and lots of colorful lights. The parade caravaned through dozens of Tehachapi neighborhoods.

The organizers let the citizens of Tehachapi know of the intended holiday event early Saturday morning via a social media posting which included a route map and parade starting time. Cars were parked along the parade route streets. Blankets were spread curbside for children and lawn chairs in front yards were seen as the parade caravaned for over two hours.