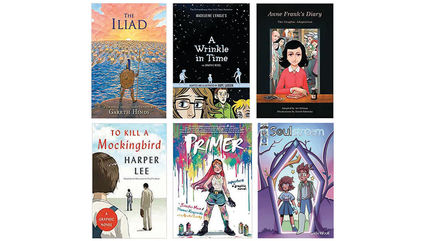 The paper is thicker and glossy. The cover is sturdy. They still offer serials, but also complete stories that have a beginning, a middle and an end. And they cover not just superheroes, but anthologies and classic novels, and new novels with artwork that can’t be provided in traditional book format. Graphic novels provide both a reading and artistic experience, yet still let your imaginations soar.

Graphic novels have actually been around for almost two centuries. The first graphic novel was published in England in 1828 titled, “The Adventure of Obadiah Oldbuck,” and written by Swiss caricaturist Rodolphe Topffer. An American translation was printed in 1842 by publisher Wilson & Company. It was called a “drawn novel” at that time.

In the 1940s publishers used public domain classics and illustrated such novels as “Les Miserables,” “Moby Dick,” “Hamlet,” “The Iliad” and “The Three Musketeers,” encouraging young readers to experience the classics in an easy setting with pictures. These classics were provided for children that would reach for a comic book and they were considered more appropriate reading for young minds.

We know that comics survived the critics of teachers and parents alike. But even great comic book writers like Stan Lee were intrigued by the graphic novel and tried their hand. “Doctor Strange” was published in a series format. Marvel followed with “Black Panther.”

Even the novelist John Updike tried his hand at the graphic novel. Updike was actually a lover of comics and their art. He said that a novelist could also use his artistic talents to create a graphic novel masterpiece.

So the graphic novel has evolved into an artform and can hold both a novel story and incredibly creative art. Easy to read, it brings a nice mix of text and visuals, and for adult readers, many times more depth than a monthly comic series can bring in its shorter form.

Today’s graphic novels still cover superheroes like Superman, Batman and Spiderman, but also branch out in newer classics like “To Kill a Mockingbird,” “A Wrinkle in Time,” “Little Women” and the two Anne’s “The Diary of Anne Frank” and “Anne of Green Gables.” Even Harry Potter’s publishers jumped in by illustrating the first four books of the series with more to come. Not surprisingly, in the world of Harry Potter results are bigger and better (and magical of course), with real book bindings and hundreds of pages of illustrations. They still figure into the graphic novel genre.

New superheroes are popping up too, as in the graphic novel “Primer” by Jennifer Muro and Thomas Krajewski, where young protagonist Ashley Rayburn lives in the same sphere as Wonder Woman, Superman and Batman. She has superpowers accessed by high tech body paints. Red paints make her strong. Purple makes her invulnerable. She lives from one foster home to another and has a villainous father. She holds her own as a 13 year old with playful energy and a mouth full of sassy comebacks.

“Soulstream” by Saida Woolf, a local Tehachapi teen, is being released as a five part graphic novel, starting with part one in January 2021 and available in full by next summer. The author deals with alternative dimensions and a mirror world. Marie and Markus wear magic bracelets that can control earth elements such as water. See the article below where Ani Hamilton interviews Wolf about her story and how it has evolved into publication.

Some say that art is subjective. When you put artform together with words, a magic is created where the reader can leap from the imagination of the author to one’s own imagination, feeling the story even more real and alive.

Order or pick up a graphic novel the next time you buy a book. Enjoy the variety of options. Feast upon the abundance. It is a joyful time of the year and a good book or graphic novel adds to the festivities of this season.