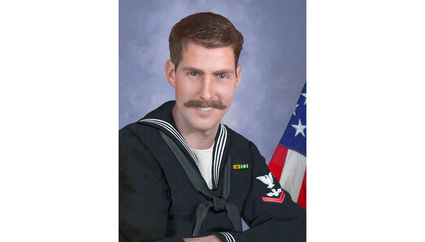 U.S. Navy veteran Jed Hannan was born in Jacksonville, Florida, in November 1943. This, of course, was in the middle of World War II. Jed's father was an aviation machinist's mate in the Navy at Jacksonville Naval Air Station (NAS), where he rebuilt engines on PBY flying boats.

Raised in New Jersey and the oldest of six children, Jed graduated from high school in June 1961. The day after graduation, he and a friend began a most ambitious road trip inspired by President John F. Kennedy. Wanting to show that "American youth aren't soft," they road their bicycles from New Jersey to Sacramento, California. About halfway through their journey, however, they split up in Kansas City, and Jed rode the second half of the route by himself. The road trip took six weeks. The two boys then hooked up again and toured much of California on their bicycles.

Jed then flew back to New Jersey, where he worked as a shipping clerk for a short time. In the fall of 1962, he returned to California, this time driving his 1954 Chevrolet to Sacramento, where he lived with a friend. He got a part-time job at a gas station, making $1.25 an hour. Seeing no future for himself pumping gas, Jed joined the Navy in January 1963, and went to boot camp in San Diego. In boot camp Jed was placed in a class of recruits that was struggling with, as Jed called it, "the academic-type stuff." Because Jed had done well in high school (he had elected not to go to college), he asked his chief petty officer if he could help to tutor the recruits. The chief petty officer ("the toughest guy in our group; nobody gave him any crap!") agreed. Jed thus assisted the other recruits in studying the various instructional and training manuals. In fact, he was so successful in his efforts that his class received an award for scoring the highest in the academic portion of the training.

Following a short period of leave, Jed returned to Jacksonville NAS, for basic aviation ordnance training, graduating in the summer of 1963 with the rank of "E2 Seaman," a junior enlisted rank. In September 1963, Jed was assigned to Lemoore NAS, near Fresno where he took a number of training courses. In January 1964, he became an "Aviation Ordnance Man 3rd Class" (equivalent to a Private First Class in the U.S. Army). He was then assigned to Attack Squadron 196, equipped with 12 Douglas A-1 "Skyraider" single-seat attack aircraft. The Skyraider had entered military service shortly after World War II, becoming the backbone of the Navy's aircraft carrier and U.S. Marine Corps' strike sorties in the Korean War (1950-53). As an aviation ordnance specialist, Jed's mission was to maintain the bomb racks and 20mm aircraft cannon on the A-1 aircraft.

In February 1964, Jed's squadron was transferred to the naval base in San Diego and assigned to the USS Bon Homme Richard (CVA 31), an Essex Class aircraft carrier build in 1944 that had seen service in the Pacific late in World War II. The Bon Homme Richard soon headed out for Hawaii and back into the Pacific region; Jed's training at this time included loading live bombs and helping to load (unarmed) nuclear weapons onto the Skyraiders. Along with the typical training maneuvers, ports of call included the Philippines (Subic Bay Naval Base), Hong Kong ("liberty call"), and naval bases in southern Japan. On one occasion, Jed took part in a bus tour to Nagasaki where the second atom bomb was dropped on August 9, 1945. There he visited the museum at "ground zero," an experience he found, "Very sobering, seeing all the photos, as well as some buildings that had never been rebuilt, they were left as memorials."

The Bon Homme Richard was then dispatched on a goodwill voyage, entering the Indian Ocean on April 4, 1964 with the "Concord Squadron," composed of the carrier, several destroyers and the fleet oiler. The cruise lasted for six weeks and took the Bon Homme Richard near Iran, the Arabian Peninsula and then along the African coast and into many ports for goodwill visits.

As the Vietnam War began heating up, Jed, his aircraft attack squadron and the Bon Homme Richard were soon taking part in much more serious ventures. By the summer of 1964, the Bon Homme Richard was on a training mission in the Gulf of Tonkin, off the coast of North Vietnam. On August 2, at about 9 p.m., general quarters was sounded (i.e., man your battle stations!). Jed immediately went to his aviation ordnance shop where the men played cards, read books and, of course, wondered what was up. After about 30 minutes the public address system crackled: "Good evening men, this is the captain speaking, North Vietnamese torpedo boats have attacked the destroyer USS Maddox. They have fired torpedoes as an act of war. I repeat, this is not a drill!" Jed and his fellow sailors were stunned. "We weren't too happy about it," he said. "We knew we weren't very far from Communist China and that they had long range bombers and missiles." Late that night, planes were loaded with fuel and bombs and launched into the gulf. Eventually, Jed asked one of the returning pilots, "What happened out there?" His response, "Son, we're at war."

From August to November 1964, the fighters and attack aircraft aboard the Bon Homme Richard flew almost daily combat missions in support of Allied forces in South Vietnam. In his role as ordnance specialist, Jed loaded bombs and napalm onto his squadron's A-1 Skyraiders and armed and maintained their 20mm cannon.

In December, Jed took a month of well-earned leave back in New Jersey. While there, he met his future wife and was married in February 1965. Together, they soon drove back to Lemoore Naval Air Station in California. From April 1965 to January 1966, Jed and his carrier were again seeing service off the coast of Vietnam. As Jed recalls, he and the other ordnance specialists were "on duty 18 hours a day," loading bombs or ammunition onto the planes and doing maintenance. The pace of work was exhausting, even for young men in great physical condition, resulting in a mishap that Jed still recalls vividly.

"We were dearming the cannon, removing the rounds that hadn't been fired on the Skyraiders. The [other] ordnance specialist was so tired, he had neglected to dearm the shells out of the last gun on one of the A-1s (each aircraft had four 20mm cannon). He was in the cockpit; I was on the deck when it happened. He pulled the trigger-the gun was supposed to be empty-to close the gun bolts to keep them from rusting, for they could rust in a matter of hours from the salt water. Well all hell broke loose. About 20 rounds were fired off! They hit the mast of the ship, cutting some of the carrier's communication cables."

Fortunately, there were no casualties. An inquiry followed, with the captain hearing the evidence. The captain, however, acutely aware that the men had been worked to the point of exhaustion for days on end, elected not take action against Jed or his workmate. "It's amusing now," Jed recalled, "but it was terrifying when it happened." 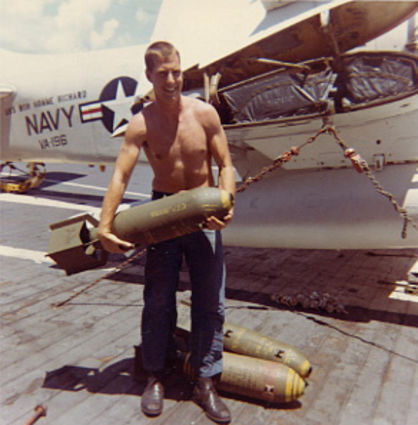 Jed left the Navy in April 1966 when his enlistment expired. In the decades that followed, living in Glendale, California, with his wife and growing family (four daughters) he worked primarily as a salesman, selling home furnishings and textile products to department and specialty stores. He retired in 2012. Before retiring, however, Jed and his family moved to Tehachapi in 2002 ("to get out of the rat race in L.A."), where one of his daughters and her family reside.

Thank you for your service, Jed! Tehachapi and America salute you.

The Loop newspaper is beginning a series of veteran interviews to honor our local heroes. If you are a veteran or know of a veteran who would like to be part of this series, please call The Loop office at (661) 822-8188.