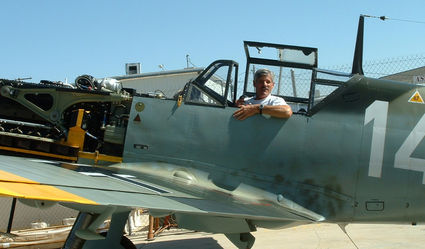 Bruce Lockwood in cockpit of Bf 109.

There have been many unusual airplanes at Mojave Airport. In 2001, when Bruce Lockwood had the maintenance facility for The Museum of Flying at Mojave, he worked on a rare flying Messerschmitt Bf 109E.

This aircraft was the only remaining Bf 109 in flying condition with the original Daimler Benz engine and after restoration, it first flew right here at Mojave Airport! As it flew by, the whine of the supercharger was highly noticeable.

After that flight, the aircraft was disassembled, crated up and sent to its new owner in Canada.

In Germany, Dr. Willy Messerschmitt began gliding in 1922 and went on to head several companies, concluding his career in the Bayerische Flugzeugwerke (BFW) at Augsburg, where his Bf 109 fighter flew for the first time in 1935.

Spain became a test-bed for the Luftwaffe's Bf 109 fighter and was successful in helping achieve victory for General Franco during the Spanish Civil War in 1939. I always referred to this German fighter as a Me 109. I guess both Me and Bf are correct. Before World War II and during the Battle of Britain in 1940, the Bf 109E was one of the world's greatest single seat, single engine fighters.

Compared to the British Hurricane and the Spitfire, the 109 held its own. Between 12,000 and 17,000 feet the Spitfire and 109 were quite similar during combat, however above 20,000 feet the Messerschmitt was considered the better machine.

The landing gear is quite different from what we are used to. First of all, it was designed to take off from soft grass strips, not hard concrete runways. It is attached inboard on the fuselage and sits at an unusual angle. It made ground handling difficult and caused many accidents.

This aircraft is sleek and beautiful, but Hitler's use of it was to terrify and destroy freedom-loving people.

Just a few months before Germany began bombing Great Britain, Winston Churchill became prime minister. In May of 1940 he told the British House of Commons, "I have nothing to offer but blood, toil, tears, and sweat." On June 18, 1940, he said, "I expect that the Battle of Britain is about to begin. Upon this battle depends the survival of Christian civilization." He concluded his speech with, "Let us therefore brace ourselves to our duties and so bear ourselves that if the British Empire and its Commonwealth last for a thousand years men will still say, 'This was their finest hour.'"

During World War II in Europe, hundreds of Me 109s were used for intercepting B-17s and B-24s. One of America's greatest aces was Robert S. Johnson with a total of 28 aerial victories against Hitler's Luftwaffe.

On one escort mission, he nearly lost his life by obeying the order not to break formation. The 20mm cannon of a Me 109 blasted his Republic P-47; he was blinded by hydraulic fluid and burned by a cockpit fire. He couldn't get the canopy open and as he struggled to break the canopy, the aircraft was descending lower, he then realized the plane was still flying, so he steered a course back to the field.

Just as he neared the English Channel, another German fighter attacked him three times. Machine gun bullets pelted his armored seat; he drew his arms in close to his body behind the protection of the armored seat and flew on. The German pilot exhausted his ammo, flew up next to Johnson, gave a salute and turned for home.

Johnson suffered burns, a bullet-nicked nose, cannon shell fragments in both hands, and two machine gun wounds in the right thigh. The rugged P-47 had 21 cannon shell holes, over 100 machine gun holes, five holes in the propeller, three cannon shells burst behind the armor plate an inch from Johnson's head and the lower half of the rudder was shot away.

As you can discern by this story, the Me 109 was a formidable fighter, but thank God we had pilots like Robert S. Johnson and aircraft like the Republic P-47 during WWII.