McAllister to be featured at Oak Tree Art and Antiques 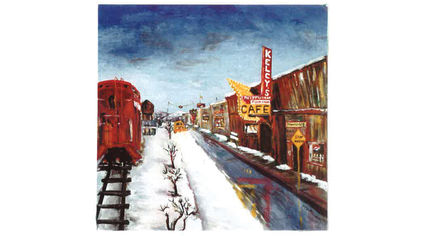 Although she has a degree in Art from California State University Northridge, Helen McAllister worked for many years as a behaviorist for LA County Schools. It wasn't until she and her husband moved to Tehachapi in 1990 that she began thinking about her art.

She knew she wanted to teach art locally and began to teach for Tehachapi Valley Recreation and Park District. As it was during the Christmas season, she did some sample paintings for the class. The first of her series was of Kelcy's Cafe. At the time (before Kohnen's) there was a caboose parked parallel to the street across from Kelcy's. Helen said she took artistic liberty and moved it to look closer to Kelcy's.

Her painting of the Depot was second and the original of that painting hangs in the Depot Museum. The third painting in the Christmas series was of the church at the corner of Green and South E Streets. There was a fourth painting as well that was of the BeeKay Theater before it was the BeeKay.

She has now started featuring these paintings as prints and they are available at Oak Tree Art and Antiques Shop located at 102 W. Tehachapi Blvd.