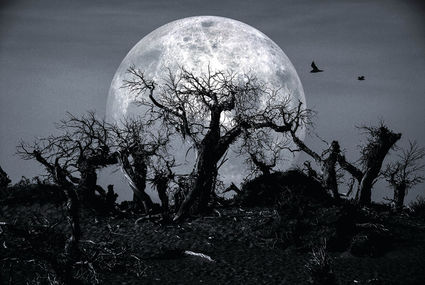 Many images associated with Halloween feature a cloud-draped full moon in the background. Whether a witch is stirring her cauldron, bats are flying through the air or zombies are rising from a cemetery, a full moon is prominent in Halloween imagery. But just how common is a full moon on All Hallow’s Eve anyway? According to “The Farmer’s Almanac,” a Halloween full moon occurs only once every 18 to 19 years. Luckily for full moon lovers, they’ll get to witness two full moons in October 2020. The Full Harvest Moon took place on October 1 and marks the full moon nearest the autumnal equinox, which occurred on September 22 this year. In addition, the Full Hunter’s Moon rises on Halloween night. The second full moon also is known as a blue moon. This is when two full moons appear in a single month, something that happens on average every 2.5 to 3 years. This unusual and rare event is the basis behind the phrase “once in a blue moon.” Those who peer out at the full moon on Halloween will not notice a blue tinge to the moon, but it will be something that’s very uncommon. Try to catch the moon when it has first risen over the horizon, shortly after sunset, when something called the “moon illusion” is visible. When the moon is low and viewed in relation to trees and chimneys, the moon can seem more massive than when it is high in the sky. This can serve as the perfect backdrop for vivid Halloween photos.