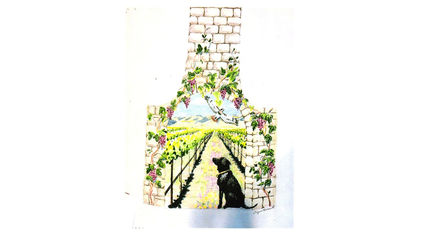 "A Day in the Vineyard" proposed mural by Lyn Bennett for the fireplace in the front of Stray Leaves Vineyard.

Before the meeting began, new Commissioner Steve Hamblin was welcomed to the Planning Commission.

A new mural was approved by the Tehachapi Planning Commission at their October 12 meeting. "A Day at the Vineyard" was submitted by Cliff Meridth of Stray Leaves Vineyard to appear on the back of the fireplace located at the future Stray Leaves tasting room on the corner of F and Green Streets in Downtown Tehachapi. The mural will be painted by noted Tehachapi artist Lyn Bennett who also created the mural "The Blacksmith" located on the Curry Street side of the old Moose Lodge. The only item of concern appeared to involve the upkeep of the mural. As the Main Street Tehachapi Mural Committee no longer exists, Development Services Director Jay Schlosser said that as the mural is on private property, maintenance will be the responsibility of the property owner.

The Planning Commission also approved a new Architectural Design and Site Plan Review (AD&SPR) submitted for the old vacant Aspen Supermarket located at the corner of Aspen Drive and Valley Blvd. Ghassan Ahmed of Wasco had submitted the original AD&SPR in April of 2019. As there had been no progress with the remodel, the City sent a letter in January that the project must be resubmitted. The resubmit was halted in September until outstanding code violations could be resolved. As part of the new approval, Ahmed met with the Planning Department and the Tehachapi Police Department and agreed to make payments to pay off the over $52,000 in code enforcement fines that have accrued over nearly 10 years.

The architectural design submitted was contemporary in style, in warm neutral colors with trellises and stonework compatible with City guidelines. Also submitted was a plan for the 26 stall parking lot and landscaping that meets the requirements of the City. There was no proposal for remodel of the secondary building, a convenience store, that is also located on the property. The project is estimated to be competed by the summer of 2021.

Before the vote was taken, Commissioner Charles White expressed the desire to give Ahmed the benefit of the doubt and Jay Schlosser agreed it was the right thing to do, adding that if the payments stop, the approval ends.

The Planning Commission will be holding a special public hearing at 6 p.m. on Monday, October 26 to discuss The Address of Tehachapi, a development of 240 homes in a gated community to be located at the corner of Highline and Tucker. The meeting will be held at Aspen Builders Community Center located at 410 West D Street. COVID-19 precautions will be observed.