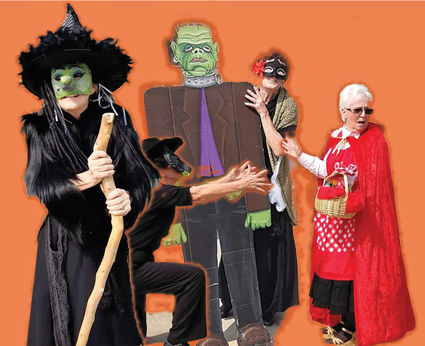 A costume contest and entertainment added a festive flourish to the Bear Valley Springs Women's Club outdoor luncheon at the new BVS picnic pavilion next to the volleyball court.

After individual lunches catered by the Mulligan Room, the club was visited by a Wicked Witch riding in on her turbocharged broom. Decked out as the sorceress, Andi Hicks changed characters and costumes while the members joined in to dance the "Monster Mash," As the wolf, she wooed Lora Schrock as Little Red Riding Hood, and crooned, "You Made Me Love You" to an oversized Frankenstein Monster. The entertainment finished with a rattling skeleton tap dancing the 1920s jazz version of "Ain't No Sin to Take Off Your Skin."

The BVS Women's Club wishes you a – Happy Halloween!