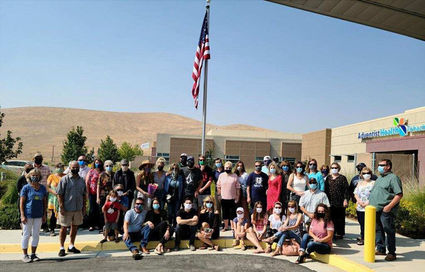 On Sunday, October 4, a flagpole near the entrance of Adventist Health Tehachapi Valley Hospital was dedicated to former Tehachapi Mayor Ed Grimes. Buddy and Nikki Cummings, who made the dedication possible, were joined by the Grimes family, their friends and other members of the community.

According to Grimes' widow, Ruthie, this all came about from the grand opening hospital tour she took along with Nikki Cummings. Ruthie remembered saying, "Ed would have loved this. He always wanted to be a part of the new hospital." Cummings, who always thought of Ed Grimes as a father figure, wanted to find a way to make that happen. Dedicating the flagpole to Grimes was an ideal way to be sure that he would forever be part of the hospital.

Nearly 50 people, including hospital staff members, listened while Buddy Cummings talked about the man and veteran who, among many other things, had been Mayor of Tehachapi three times, and had been the Voice of the Tehachapi Warriors football team for as long as most could remember.