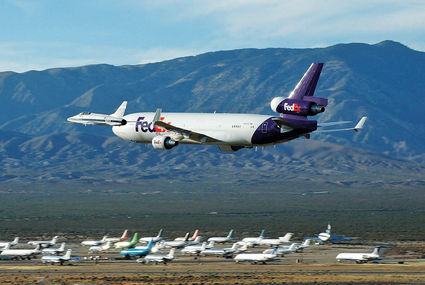 Dick Lawyer, one of our very good friends and a big part of Mojave Airport's flying history, passed away on November 12, 2005. It was just the month before that Dick flew Flight Systems F-100F at Mojave Airport for FTA and Jeremy Mosher of Jet Photos captured this photo.

Dick's wife, Gayle, emailed to tell me that they wouldn't be able to make the veterans Day Ceremony that year because he was going elk hunting.

I received a call from their close friend and neighbor, GaIL Knight, that morning telling me the unbelievable news that Dick had passed away late Saturday night while working at the computer. Al and I were just stunned and speechless. He had a blood clot in his leg that apparently moved to his heart.

Slow talking, with a dry sense of humor, Dick had a way of making everyone around him feel at ease. We always admired his piloting skills and valued his friendship. He shared flying stories with us that we still laugh about today; of course, a big part of the humor was his slow, low-key mannerisms when describing a particular situation.

He was a distinguished graduate of the U.S. Air Force Test Pilot School at Edwards AFB, the USAF Fighter Weapons Instructors School and was a Fellow in the Society of Experimental Test Pilots.

He was scheduled to fly with students that Monday morning at the National Test Pilot School where he was employed as an instructor pilot.

"His church was Mojave Airport," his wife told her friends. "He loved flying in any kind of airplane, just so he was off the ground."

Dick was born on November 8, 1932, and was a graduate from USC in 1955, earning a BS Degree in Aeronautical Engineering. He had a distinguished service career in the USAF from the mid 1950s until retirement in May 1982. 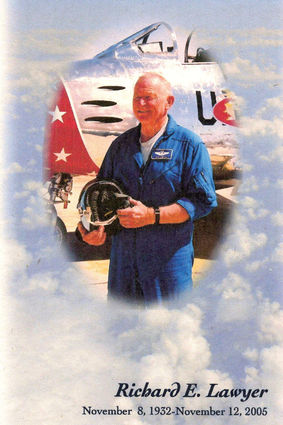 He was selected as an astronaut December 11, 1965, on the Manned Orbiting Laboratory project, a classified military manned space station. When the MOL project was canceled, he was serving as Deputy Commander, Operations, Tactical Air War Center, Eglin AFB, Florida. He was a qualified military pilot and graduate of Aerospace Research Pilot School.

Supportive of his wife and family, Dick often planned activities that involved being with his kids and grandkids. Dick was an avid hunter and fisherman. He planned a trip to Alaska every year in August for several days of halibut fishing.

God bless Dick Lawyer and his wonderful spirit that touched so many people here at the airport. He lived his life well and made a difference to scores of people. We miss him so much. See you on our next flight!